I’ve previously reported on Ravi Zacharias’ failure to preach the Gospel to those following a counterfeit Christ after he was invited to speak at the Mormon Temple in Salt Lake City (see here). Then I posted on Ravi’s descent into the abyss of compromise (see here) when he refused to pray in the name of Jesus Christ at the latest National Day of Prayer (Coram Deo even wrote a piece on Ravi’s compromise here).

And now Ravi Zacharias is proving yet again that compromise will always take a man where he never intended to go.

Ravi speaks favorably of Henri Nouwen and can be seen in the following video (at the 5:47 mark) calling this Roman Catholic mystic “one of the greatest saints of recent memory.”

Ken Silva has also weighed in on this here.

And what started as a little compromise here and there, seems to have started a snowball rolling for Ravi. Slaughter of the Sheep is reporting that Ravi Zacharias will now be speaking at none other than the Crystal Cathedral at Robert Schuller’s infamous ReThink Conference scheduled for February 2009. Lighthouse Trails is also on top of Ravi’s latest compromise with the rank heretic Schuller in a piece they did here.

A friend and I met some guys from Nebraska to go witnessing at the Democratic National Convention in Denver last month. It was quite interesting to see the overwhelming police presence, the great number of reporters, and the creepy protestors. The guys from Nebraska have some interesting witnessing techniques that I wasn’t sure about at the beginning, but after observing them in action, I realized they were effective ways to get conversations started easily.

The Nebraskans had three 5’x7’ signs, which they display on poles. The large signs can be seen from quite a distance. The one we were using says, “It’s your choice: Jesus or hell.” Of course, to think about myself standing there with a sign was a little bit of a gut check. Do I really want to take such a bold stand for the gospel? Is this drawing too much attention to me? (Of course, it’s important to exercise wisdom about the proper venue for such a sign.) After seeing many people walk up to these guys and ask questions about the gospel—whether to start a debate or with genuine questions—the effectiveness was evident. They didn’t have to try to start conversations with people. People interested in conversing came to them. At various points, the sign drew quite a crowd of people with whom to discuss our faith. 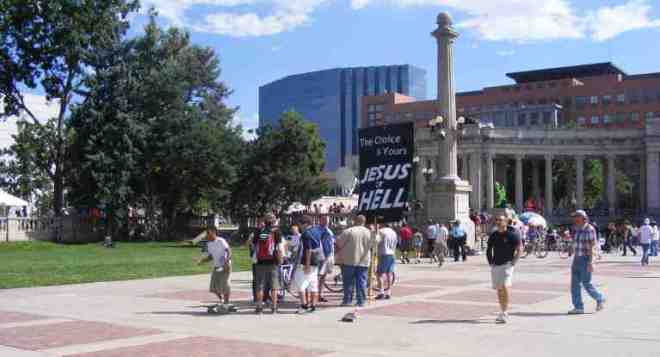 One Nebraska friend also came with a tract specially written for the event titled, “Jesus doesn’t vote Republican” and in fine print, “(Democrat either).” It explained that Jesus, as the King of Kings, appoints to office whomever He wants, and it gave a solid gospel message. We were folding about 200 copies in Office Max when a young man asked if he could read it. He quickly glanced at the title, announced he was with the Ralph Nader campaign, and asked if we would like to have a table at the Green Party event the following day. We told him that we’d be interested, but we didn’t hold out much hope that the offer would stand after they scrutinized the message of the tract. He just said that he’d have a lady from the campaign call us with the details.

After folding the tracts, we went witnessing at the interfaith assembly, packed with people. One of the Nebraskans who stood there with the sign must have had 50 pictures taken of him, and was interviewed by various media outlets multiple times. I handed out about 150 tracts. Most people were busily going wherever they were headed, and not too interested in having conversations, although I did have a couple.

After a couple of hours, we went to the park in front of the state Capitol where the protest parades were beginning. Our original plan was to eat lunch—until we heard a singer in a band performing there said that there would be no Judgment Day. We took that to mean that the people there needed to hear the truth about Judgment Day, and we set up our sign in the park. The people were open to talking; each of us had many good conversations there.

While the other guys were standing with the big sign, they passed me a little sign that said, “Repent for the kingdom of God is near.” I leaned against my leg and passed out tracts to the people who walked past. Several people came up and talked to me. I was interviewed by a Fort Collins radio station, and I gave a quick gospel message. I was also interviewed by a Boulder newspaper. The other guys were interviewed on camera by BET and Al Gore TV and others, so I hope the gospel got on the air somewhere.

The next morning, the lady from the Ralph Nader campaign called, and gave us the details about setting up a table at the rally, which was held at the University of Denver arena. We were the sole Christian table. Others had messages such as stop torturing terrorists, impeach Bush, give Israel to the Palestinians, fight for women’s rights at work, and support the Sierra Club. It was clearly miraculous for us to get the opportunity to pass out tracts and witness inside a far left event. 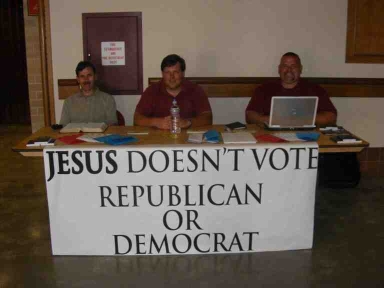 Our table at the Ralph Nader rally.

The people were nicer than I had expected at all of the events. I’ve found that oftentimes those who hold tolerance as the highest virtue fail to exercise tolerance of Christians, but most people behaved well. There was no shortage of leftists with their far-out ideas, but the worst thing to see was the “sweet,” little, old pro-choice ladies.

I’m sold on the sign evangelism technique. I think every Christian should be handed his or her own huge sign as he or she exits the baptismal waters. Until then, we’ll all have to procure our own.