Just when you thought it couldn’t get any lower or more wicked than the fetal bites cookie cutter.

From the fetal terrorist organization Planned Parenthood who brought you The Negroe Project, genocidal racism, and propaganda cartoons reminiscent of Nazi Germany, now comes their latest head-dive into evil.

Just like King Herod, now you too can give the gift of murder this Christmas. Planned Parenthood is offering Christmas gift certificates that can be used for abortions. Check out the news video by clicking here. 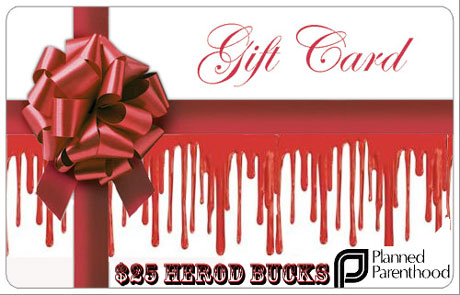 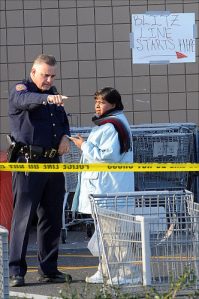 While just a couple days ago over 100 people died in India at the hands of merciless, bloodthirsty Muslims (and the city is still currently under siege as of the writing of this post), today in America a 34 year-old Wal-Mart employee was killed after being trampled to death when a mob of shoppers broke down the doors to get their hands on the holiday shopping bargains. What was this mans life worth?

The CBS news article also contains a cellphone video from a shopper which shows emergency personnel futility trying to save the mans life. What a contrast between us in the States and the rest of the world.

America, oh America, what have you become? While the world is in turmoil we numb ourselves on video games, text messaging, television, and worshiping our pop idols who attend 20 million dollar parties. We simply don’t get it, do we? Today we eat, drink, be merry, and shop till we drop, yet we have no idea that tomorrow we die.

For those who don’t understand the significance of this, I urge you to check out the post A Storm is Brewing While the Masses Sleep and be sure to listen to the accompanying short audio clip on that post.

And He told them a parable, saying, “The land of a rich man was very productive.”And he began reasoning to himself, saying, ‘What shall I do, since I have no place to store my crops?’ “Then he said, ‘This is what I will do: I will tear down my barns and build larger ones, and there I will store all my grain and my goods.’And I will say to my soul, “Soul, you have many goods laid up for many years to come; take your ease, eat, drink and be merry.”‘ “But God said to him, ‘You fool! This very night your soul is required of you; and now who will own what you have prepared?’ Luke 12:16-20

A little plain-speaking would do a world of good just now. These gentlemen desire to be let alone. They want no noise raised. Of course thieves hate watch-dogs, and love darkness. It is time that somebody should spring his rattle, and call attention to the way in which God is being robbed of his glory, and man of his hope. – C.H. Spurgeon