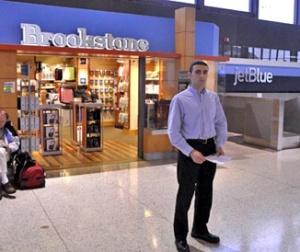 Brookstone, a store known for innovative gadgets, fired Peter Vadala from his sales position at the Logan Airport branch in Boston, MA.  Fired because Mr. Vadala stood up for his Christian faith and vocalized his disapproval of a homosexual union which a Brookstone female manager made repeated references to in approaching Mr. Vadala during the work day.  And of course as we all know nary a word can be spoken against the sin of homosexuality without all the fury of hell being unleashed to beat the person speaking such non-politically correct words into silence.

This being exactly what Brookstone has done by firing Mr. Vadala.  A company that prides itself on tolerance but this so-called tolerance is only a one-way street.  A one-way street because even though Mr. Vadala was extremely offended by this manager and her relationship, his feelings and religious beliefs (which Brookstone says they defend) are immaterial because homosexuals want über (supreme) rights.

To read about this case, please see the article at WND here.  You also can check out MassResistance which deals with cases such as these.  Also, I highly encourage readers to contact Brookstone by writing a letter, e-mailing, or calling in order to voice your disappointment with their decision (get your friends and others to do so likewise).  In so doing, please be strong in your beliefs and wording, but take note to reflect Christ and not give the Gentiles an opportunity to blaspheme God.  Also, tell them you will be voting with your dollars and not supporting their store.  Sadly, the voice of mammon is the typically the only voice that corporations give ear to.

Our purest works are no better than filthy rags, when tried by the light of God’s holy law. . . . Our best things are stained and tainted with imperfection. They are all more or less incomplete, wrong in the motive or defective in the performance.