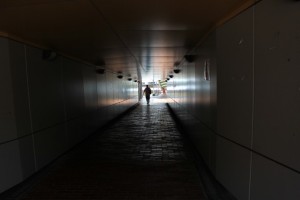 It seems like such a short time ago that I was invited to become a contributing writer to DefCon. Pilgrim brought me on board when I was running a blog that received maybe 20-30 views per month. He blessed me with an opportunity to share with a larger audience about the necessity of Christians to share the glorious gospel of Jesus Christ. What an amazing journey this has been.

I have been blessed by many readers who have been encouraged and edified. I have also seen the darker side of the blogging world, those who view each article as their own personal sounding board to vent anger and vitriol within the comments. Yet, it is not really for any of those for whom I write, but in truth, it is for an audience of One. I write to bring glory to my Lord and Savior, Jesus Christ. If I do not bring honor and glory to Him, then none of what I do is worth anything. I pray that I have done that.

Last year, Pilgrim approached me and asked me to take over the reigns of DefCon. I was humbled more than I can say by this. It is an awesome task to take over the responsibilities of a blog site that over 1,000 people a day visit. It requires being a writer, a leader, a mediator and much more. It can be invigorating and exhausting all at the same time. However, I saw first hand what Pilgrim became weary over, the almost constant vitriol from readers who either took issue with an article because it addressed an evangelical sacred cow, or called us compromisers because we were not “fundamental” enough for their tastes. I saw brothers and sisters bite and devour one another over things that, while important, simply did not rise to the level of the core doctrines of the faith. Such animosity toward the brethren made me weep.

It was this that led me to call for a change to DefCon. It was always my personal stance that, while discernment articles are sometimes necessary, they should never be the primary diet of the Christian. Being strengthened and edified in the word of God was one primary tasks of every Christian. Thus, my writing reflected that (I hope). As the head administrator, I made the call to change the primary direction of the blog to that end. No more would we be the instigators of so much virtual “bloodshed” by providing the steady diet of discernment to our readers. We would go back to the word and expound it for the purposes of edifying and strengthening the brethren. While some were not fond of this change, and their absence is noted, I have never once regretted that decision. The glory of God and His character are far too important to me than generating more hits on this site.

However, as I wrote earlier this year, my family took quite a hit when my wife was diagnosed with a rather aggressive form of cancer. My priorities in life changed. While I tried to maintain my administrative duties (along with those required of me on the Cross Encounters Radio program), I found that it was my duty to my family that was of paramount importance. I was grateful for my fellow contributors who managed many things during my absence. Their work made it possible for me to focus on the time of tribulation we were enduring.

We are now three months past my wife’s final treatment and are cancer free by God’s grace. She is going through the tests and medications necessary to maintain this status, but her continued ability to draw breath is by God’s hand alone. As I have noted in recent posts, this last year has given me some clarity about my responsibilities as a follower of Christ, from the worship of my Savior to the study of His word. And as such, a growing sense of change has made itself known in me.

I truly love being a part of DefCon. Being able to share the amazing gospel of Jesus Christ through the posts I have written is more joyous than I can say. To bring glory to His name and to encourage the brethren to do likewise is an amazing gift given to me by the Lord. However, God has also given me several amazing responsibilities. The first is to be a husband and father, according to His calling, to be the model and the teacher of the gospel in my home. The second is to be a faithful employee in my chosen profession, to honor my superiors with my best effort. The third is to be the assistant manager and on air producer to a Christian radio program that focuses on evangelism, the ministry that is truly my heart’s desire. And very much tied with the last, is the blessing of being the administrator of this blog that ministers to so many wonderful brethren. With such awesome responsibilities, I am faced with a choice. I could either attempt to hold to all of them, yet not give the full attention all required. Or I would have to step down from something.

Through much prayer, and discussion with some of my fellow contributors, I came to a bittersweet decision. It is with much heaviness of heart that I must announce that I will be stepping down as head administrator and contributor to DefCon. I love this blog and I love the readers who are a faithful part of it. However, at this time, I cannot be a good steward of the position given the current circumstances in which I find myself. I believe that in this season of life, the Lord has led me to this point and another must take my place. While I hate to leave this role, I know that my successor will be more than capable of handling the task.

Mark Escalera (aka, The Jungle Missionary) has graciously stepped up and accepted the mantle of leadership. He has been a steadfast and godly contributor for several years. His articles have blessed many brethren and his wisdom has been greatly appreciated. Mark held down the fort for me on many occasions during the last year and I can think of no better person to take the role of head administrator. As he steps into this role, I ask you readers to be a blessing to him as you have been to me during the last couple of years. Thank you Mark, I know this blog will be in excellent hands.

And now I must say goodbye…sort of. I am not heading off into the sunset never to be heard from again. I am still very much involved in the ministry of Cross Encounters Radio as co-host and on-air producer (and I can be found roaming the Twittersphere sharing the occasional thought that leaks from my brain). My articles will remain, if Mark finds them useful, for folks to continue to read. While I will not be part of DefCon, I am not ceasing my involvement in online ministry. So if you see me roaming the virtual halls of the world wide web, tap me on the shoulder to say hi.

I thank you all for taking time to let me be a part of your lives. I am grateful that you gave this nobody from nowhere more than five minutes of your time and read the rambling thoughts I shared. I pray it has been helpful to you in some small way. May God bless you and keep you. And may you all be busy about our Father’s business of proclaiming the gospel of our Lord Jesus Christ.