Futureville – A Bridge Too Far

A review by Stuart Brogden

The premise behind Skye Jethani’s book, Futureville, is a good one – “What we think 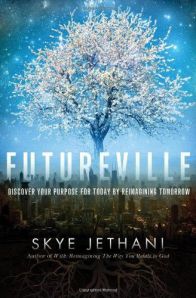 about tomorrow matters because our vision of the future is what determines how we understand the present.” (page 3) Chapters 3 and 4 serve to provide common, but flawed, views of the created order and how it will be in the next age. In each of these, roughly showing the unrealistic golden age embraced by post-millennials and the pessimistic end of the world embraced by dispensationalists, the author provides historical and biblical support for his view of the flaws in each. In chapter 5, Jethani tells us what, in his opinion, the proper view of tomorrow is, with the remainder of the book examining various aspects of our lives that are impacted by our world view.

Chapter 2 begins a scene describing the 1939 New York World’s Fair, describing the image of the future presented by the mythical community of Pleasantville. The author uses this as a springboard to call the Christian focus of “last things” Futureville. This term is the title of the book, of course, and it becomes – for me – a tiresome term that is over-used. He contrasts the end of the age with the beginning – the Garden. In doing so, Jethani does well to explore the nature and meaning of the Garden of Eden, making very credible and solid connections with the New Earth. He tends to stretch points too far and does so with this statement (page 25): “Scripture affirms that humans require beauty to thrive. Beauty nourishes our spirit the way food nourishes our bodies.” He provides no footnote, no Scripture reference. The Bible tells me music has value but that only Christ can satisfy and nourish our souls. There is no substitute.

In keeping with his pattern of coming up with unusual terms for well known biblical concepts, Jethani calls the post-millennial view evolution and dispensationalism is evacuation. His descriptions of the effects of each of these views are well presented. Of the evolutionary view, he says (page 46) “The belief that we are responsible for the creating Futureville fueled many ministries and Christian initiatives.” Indeed, if we think we are to bring in “the golden age of Christianity”, we will behave far differently than if we believe it will all burn and nothing is worth saving. Jethani’s thesis is that a solidly biblical view of end times – where the heavens and earth (all that God created) will die in God’s judgment as Peter describes it. But as the body of Christ lie in the grave for three days and was resurrected in far better shape, so will the created order. That which was cursed by God as a result of Adam’s sin groans in anticipation of this resurrection.

The balance of the book covers his view of the resurrection of the earth and what that means, as well as our vocations, the order of God’s creation, the beauty and abundance thereof, finishing up with our hope – which is rightly rooted in the resurrection of the Lord Jesus. Jethani’s case for the resurrection of the earth, rather than the total annihilation of it, is credible and convincing. The conclusions he draws in these last chapters are less so. He refers to the God-declared beauty of the Garden of Eden and the God-ordained beauty of the tabernacle and then extrapolates that to thinking what man does is likewise valuable. He agrees with Richard Mouw that of “the artifacts and creations of pagan cultures, God will instead purify and redeem them for use in Futureville for his glory.” (page 95), going so far as to say, “In Futureville, King David may someday admire Michelangelo’s status of himself” (page 96). He comes too close to a post-millennial view in telling us “We have a role to play in God’s plan to unite heaven and earth, to advance the story of of the world to culmination, and to see the earth cultivated into the garden city.” (page 97) Jethani’s case for thinking the work of the unredeemed will be purified and used by God in “Futureville” is contrary to what the Bible tells us about those people and their “righteous acts”. Not all the works of Christians will pass through God’s judgment – why would anyone think some of the works of reprobates will? The trees in the garden and the tabernacle in the wilderness were God’s handiwork – He caused the Egyptians to give their wealth to the Hebrews, He gave the plans for the tabernacle to Moses, He gave wisdom and skill to various workers to build it. No work of man has these critical attributes – it is a bridge too far to say pagan art can be pleasing to God; that art generated by those who hate Him and are the objects of His wrath.

In describing the importance of social work and relieving the suffering of people, Jethani tells us there should be no tension between social justice and gospel evangelism – they are both vital (pages 122 – 124). In his discussion of this concept, he falls into the same pit many others have – putting more emphasis on that which can be measured, while claiming to extol evangelism equally; apparently forgetting the biblical injunction that godliness is a higher priority for the Christian than physical wellness or fitness (1 Tim 4:6-16). His post-millennial view shows up again (page 131) when he says “The Communion table looked forward to the coming day when all injustice would be made right in the garden city of God.” While the Corinth church was a hot-bed of selfishness and other problems, the message in 1 Cor 11 about the Lord’s Supper is a reminder that they who are in Christ are equal, without social standing or rank differences; a reminder that Christ earned His standing as the Lamb of God and bought us with His blood; a reminder that He has gone to His Father and will return to take us home. Being with Jesus where there is no sin or temptation thereto – that is what the table declares to us. It puts the sacrifice of Christ and our eternity with Him in terms of human value to claim Communion is about injustice coming to an end.

All in all, this book has much to recommend. But there is just as much to be wary of. It is a good thing if one wants to be properly oriented to the future so he will live rightly today. A better, more biblical approach would be to study the Idealist or Optimistic Amillennial perspective, using a good guide to Revelation such as Dennis Johnson’s Triumph of the Lamb. God’s people need to better understand His Word – for in it alone He has given us what we need for godly life and true worship of Him. And to bring Him glory is our highest aim in life – as it is for all creation.