**** – Note from Mark — This post was written and meant to be an encouragement to the believers. It has gone far off track from that with the comment thread; therefore, I am shutting down the comments here. ****

There are times that I think God underestimates how much I can take in this life. The strength I used to think I had has disappeared, and now it is time to lean on Him. But, when I think about it, that is what I’ve been doing all along. Sometimes He just needs to remind me that I am weak, but He is strong. 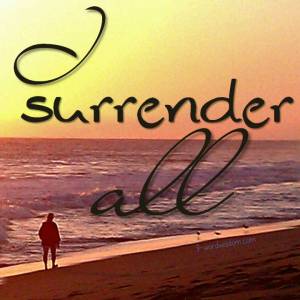 The fact is that God does know how much we can take but He also knows how much He can carry, and that is immensely more than we can imagine. If you are His child, He will stretch you as much as He has to in order to bring you into a deeper relationship with Him.

This is something I struggle with, but I am learning to sing from the heart:

Surrender is not something that comes overnight, but it is something we must learn as we walk with our Savior and pray to please Him. We can’t pick and choose what we want to surrender and what we want to keep. Jesus gave everything for us. How can we give any less to Him?

26 thoughts on “I Surrender All”