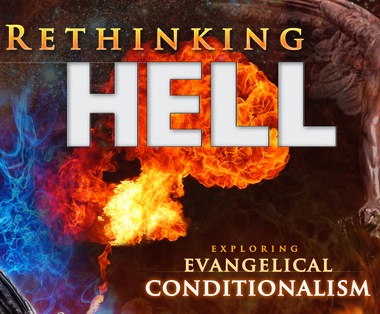 (Notice: the blog series has moved to Rethinking Conditionalism on Our Common Salvation)

The subject of hell for many is very uncomfortable. Even trying to deal with this subject as a topic of apologetics seems very shallow. After all, if there is any kind of punishment after death, since it is from God, it will be terrible regardless of how we try to magnify or mitigate the sentence. Whether we are annihilated immediately after we are resurrected, suffer conscious torment in the intermediate state only to be resurrected and continue in that state of suffering, or we suffer for a time and then are annihilated, why should it matter? Does it matter? Well, yes and no. Yes, in the sense that if we are going to look at what happens to people who are not saved and their punishment, we inevitably will view the atonement and God through a particular lens. No, in the sense that if a person believes only that hell is not eternal conscious torment, and this is their only variation, they aren’t fundamentally saying something that could be considered damnably heretical. However, they certainly do raise eyebrows of concern, especially in the area of the atoning sacrifice of Christ. Because one thing you must always be aware of is that every major doctrine is interconnected. Hell and Heaven are major because they inevitably affect one’s view of what the atonement accomplishes. Alter the state of either destination, you must inevitably shift your view, however subtle, concerning the cross of Christ. Some shifts are damnably heretical (or at least can lead there). Meanwhile other shifts are inconsistent and concerning, but may not be.

For the ministry of Rethinkinghell.com, there are a number of contributors that propose the idea that immortality is not for the wicked, but only reserved for the saved. That is, immortality is conditional upon salvation in Jesus Christ (the doctrine of conditional immortality – CI). As for the wicked, they do not receive immortality as the righteous do. They are doomed for punishment that is eternal, but it is not the process of being punished that is eternal, but the results of the punishment that is eternal. The Scriptures that mention eternal punishment, eternal fire, eternal destruction, according to this position, are semantically pointing to the eternal result of annihilation (or “death” as they put it) that comes from God, not the fact that the punishment or the fire itself will last forever.

In the future posts, I will deal will various arguments that some of the contributors of Rethinking Hell make. I will seek to also clarify and strengthen why I believe the experience of the wicked in hell will be eternal conscious torment. I don’t want to be petty and trite when I discuss this seeing that I view this doctrine as major. However, what needs to be stated is that while I strongly disagree with those that believe this doctrine, I cannot confidently affirm at this time that such a doctrine is damnably heretical. At first I did. I have throttled back some. Seeking to err on the side of caution. I still have a wide suspicion, though, about this doctrine not only because of some of the contributors’ position on penal substitution, but also the theological implication this has on the atonement of Christ (even though the contributors of CI say there are none). Nevertheless, there is proof that this doctrine is indeed a gateway doctrine to heresy and heretical company. And that will be made apparent as well.

These points will be discussed in later posts in detail. But for now, just know that the doctrine of conditional immortality is gaining much notoriety among certain evangelical circles, and everyone within Christendom will have to deal with the subject sooner than later. I have been following Rethinking Hell for about 3-4 years now, and have seen notable attention. This is not to start a theological mob, but to create awareness that discussion is now necessary, and there will be many who will divide, yet again, over something like this. As you read the following parts to this series, remember that while some people say this is not a major doctrine, I believe that it is. To what degree that this will affect/change fundamental truths of Christianity is too soon to be seen. But there are major concerns that I hope people will notice and address as it grows. If you are not familiar with the ministry, you can go to Rethinkinghell.com and read for yourself some of the articles and podcasts put forth by this ministry.

-Until we go home