There is a popular illustration that is often preached to help warn believers and non-believers of the dangers of sexual sin. It is often told that sex within the confines of marriage is like a fireplace, which, when in a controlled environment, provides blessing, warmth, and visual stimulation that is not harmful or dangerous. Any kind of fire outside of that contained and safe environment will spread, consume, and destroy, because that is how fire behaves. This illustration, and many others like it, is not entirely wrong when depicting the proper context for sex in a marriage relationship. And other times it is heavily used to warn the masses from the devastating, earthly consequences of sexual sin. Although I would not dogmatically disagree with this illustration, I find that it falls short in recognizing how adultery functions first in the heart, and perhaps how most people view sexual sin in reality. Allow me to give my illustration. 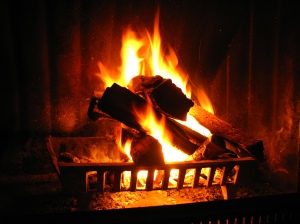 Imagine a person sitting in front of the fireplace inside their home on a cold, winter’s night. As they set in order the wood and the kindle to get the fire started, they spark them with a match and gaze in anxious expectation as the fire begins to take hold and consume the logs. After a slow start, the fire quickly begins to provide the heat and comfort the person was initially anticipating. Then, after a while, our mystery person is enraptured by the dancing colors of yellow and orange, and is hypnotized by the beauty of a fire well contained. It is only a matter of time before the warmth and coziness of that fire no longer satisfies the person to be content by mere watching, but somehow, in the person’s curiosity, the fire seduces this individual to want to touch it. It is in that moment of dullness and metal stupidity that the flesh makes contact with the hot, flesh scolding element, and the person has now been warned of the dangers associated with tampering with fire. However, it doesn’t stop there. This person, unmoved by the danger, endeavors to find a way to handle this fire without getting seriously injured, and also without removing the fire from its safe containment. Eventually, this special someone succeeds in developing a glove that will allow the pleasure to play dangerously with this fire, and also prevent the surrounding home from being destroyed.

In this illustration, lust in the heart is introduced by a spark then eventually burns into a full-blown fire if not put out. In the chance that it isn’t snuffed out, since it is contained, anyone (male or female) is initially content with having it warm the heart with fantasy and satisfy the sinful expectation for which we first intended. However, because sin is deceitful, we no longer are fulfilled with mere gazing and distant warmth. We eventually become enraptured by the curiosity of what we can get away with. If we do get slightly or severely burned, we turn to our idol factory of a heart to try to concoct a way we can toy with this fire without injuring ourselves, and meanwhile still keeping the fire safely contained. If we do discover a way to deter the earthly consequences and keep this fire from spreading and destroying, watch out! Because apart from the grace of God, nothing will stand in our way!

What I have just described above is the normal, everyday circumstances by which folks in our western culture approach the sinful act of adultery and sexual immorality. Sure we are living in a time when sin is becoming bolder, but, for the most part, there are still stigmas associated with adultery and certain kinds of immorality that most do not want to be attached to. Because of this, we will find, more often than not, individuals who spend precious minutes learning how to get away from dealing with the consequences of sexual immorality, or trying to figure out a way to play with a fire well contained. Does everyone get away with the destruction that sexual immorality breeds and brings forth in the world? No. But the point here isn’t to illustrate what sex is like when it isn’t contained within the confines of marriage, but to reveal that normal, everyday temptation begins with the heart and is often elevated to playing with it without getting caught.

Did you know that there are many individuals in the world that will not get caught watching pornography? The same goes for those that will be able to enjoy their sexual crave of adultery, homosexuality, child molestation, etc. with no earthly consequence. Sure the blazing fire they have left behind will be of no concern to them, but for the most part, they are left unscathed. Do you think this kind of person cares about the illustration of sex in its proper context being a like a fireplace? Absolutely not! They couldn’t care less because they have found a way to keep themselves protected from earthly consequences. So what can you say to someone who has complete apathy concerning fire being a destructive force, when, as far as they are concerned, they have their fire burning in a well contained environment?

In Hosea 7:4-7, the prophet is declaring from the mouth of God that Israel has gone in the way of adultery. God describes how they are like a baker, which has begun his fire in the oven in order to bake his bread. But because the fire got too hot, he stopped for a while and filled the time to knead the dough until the whole lump was leaved. Then, while they sleep at night, the fire still burns in the oven until the morning when it is at the right temperature to accomplish the plan of baking the bread.

In this parable, God is revealing that sexual immorality begins like an oven fire (v4). Note: it is a fire well contained at the moment. Then, we wait for the fire to be just right so that we can accomplish our intended plan. Often we must wait for the anticipated time in order for us to carry out our sinful plans so that we can get away with them. This sometimes involves pondering through the evening as the Scriptures points out (Hos. 7:6; Pro 4:16; Mic. 2:1). But, when the time comes, and all is in place, we dive at the opportunity that has been burning in our heart for quite sometime, and in our heart of hearts we think that God will not see and that there will be no consequences to our well thought out plan (Psa. 10:11-13; Isa. 29:15).

Here is the reality and crux of what I am trying to say. Eventually, you may get caught, but also, you may not. If you are of those who have been reading this and have not been caught committing any acts of sexual immorality, I beg you to first realize that God is watching you. Every pulse of your hearts desire is not without the face of God overlooking them. It should paralyze you with godly fright to even pursue sexual evil. Unfortunately, because the fiery colors enrapture and deceive us, we think we can get away with playing with it without consequence. And for a while (and maybe your whole life), this may be the case, but sooner or later, you must come face to face with the God of this universe who must judge and punish sin.

The second thing I want you, reader, to realize is that a fire well contained is still a fire! Even if you think you have adultery of the heart “controlled” you need to realize that it is only by God’s grace that such a fire is extinguished (Rom. 6:11-13). Not only that, the Bible warns us to run from sexual immorality (1 Cor. 6:18). Not stand next to it, gaze upon it, or even try to touch it without getting burned. But run! This fire is nothing to be tampered with. Even if we figured out a way to engage in sexual misconduct on earth without an ounce of guilt, danger, or consequence associated with it, it does not, I repeat, it does not negate the reality that God has forbidden such acts. Earthly consequences do not dictate God’s absolute morality, it only reveals the seriousness of His judgment.

“Earthly consequences do not dictate God’s absolute morality, it only reveals the seriousness of His judgment.”

Thirdly, if you have been someone who has been getting away with committing sexual acts for a while now, I warn you that this is not a good thing. If you feel no godly sorrow and constant repentance over whatever act you are partaking in, I pray that you will right now get on your knees and plead with Jesus Christ, the Savior of sinful men, to save you from your own depraved craving. If you have already been burned and are thinking of some way to get away with the consequences of sexual sin your next time around, I pray you realize that earthly consequences are not what you should fear, but God who beholds all things done in darkness and in light, and can cast both body and soul into hell (Matt 10:28).

Finally, if you’re of those that have recovered or are recovering from the destruction that sexual sin breeds in your life, I pray that you would praise God He has had mercy on you to show you the dangers of playing with fire and has not left you without a witness so that you might repent and trust Him to be your all satisfying and precious pleasure on Earth (Psa. 16:11; 37:4; 73:25; Isa. 26:8-9). Whether or not the illustration of sexual immorality being a like a fire-place convinces you to avoid dabbling in forbidden lust, one thing is for certain, there is still no safety in playing with fire, even if it is well contained.

2 thoughts on “Sex and a Fire Well Contained”