When I can’t sleep at night, I often listen to my Bible app. Last night, I heard the account of Peter denying the Lord. After declaring three times that he did not know Jesus, Luke 22:61-62 tells us: “And the Lord turned and looked at Peter. And Peter remembered the saying of the Lord, how he had said to him, ‘Before the rooster crows today, you will deny me three times.’ And he went out …”

If I had never heard the story before, I would have been holding my breath. What was he going to do?!

Back in Matthew 26 and 27, we read of Judas betraying Jesus. Matthew 27:3 says that, when Judas saw that Jesus was condemned, Judas changed his mind and returned the money to the chief priests and elders. They had what they wanted, though, so they weren’t going to give up the man they had been waiting for for so long. 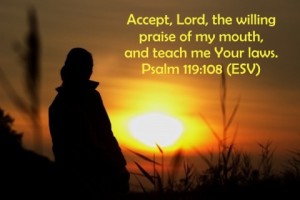 Upon hearing this, verse 5 says about Judas, “throwing down the pieces of silver into the temple, he departed, and he went … and hanged himself.” How sad! He could not live with the guilt of knowing he had betrayed an innocent man so he ended his life prematurely.

Peter, on the other hand, had a different outcome. Instead of hanging himself, Peter “went out and wept bitterly.” He too felt the depths of his sin but, instead of giving in to despair, he chose to live.  Because of this, God was able to use him, and he became a bold witness of the One he had once claimed to not know.

I doubt there is a person alive who has not failed the Lord at some point or another. Some give up and decide there is no point in even trying, while others fall on their knees in repentance and then get up, wipe the dust off, and move on, growing stronger than ever before.

Who are you more like? Judas or Peter? When you make a mistake, do you crumble and give up, or do you ask God for forgiveness and then set out to fulfill your calling once again? Let me encourage you to learn from Peter. God is there and ready to forgive a repentant heart. Sometimes it is through failing that we learn our humanity and turn to Him like never before. He loves you. Don’t lose sight of just how much.