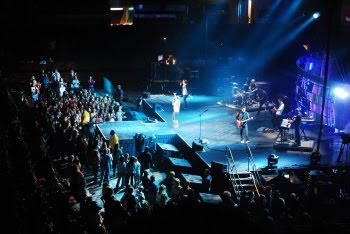 and celebrate your faithfulness–schlepping to church early, Sunday after Sunday, making time for practice mid-week, learning and writing new songs, and so much more. Like those skilled artists and artisans that God used to create the tabernacle (Exodus 36), you are willing to put your artistic gifts in service to the Triune God.
So please receive this little missive in the spirit it is meant: as an encouragement to reflect on the practice of “leading worship.” It seems to me that you are often simply co-opted into a practice without being encouraged to reflect on its rationale, its “reason why.” In other words, it seems to me that you are often recruited to “lead worship” without much opportunity to pause and reflect on the nature of “worship” and what it would mean to “lead.”
In particular, my concern is that we, the church, have unwittingly encouraged you to simply import musical practices into Christian worship that–while they might be appropriate elsewhere–are detrimental to congregational worship. More pointedly, using language I first employed in Desiring the Kingdom, I sometimes worry that we’ve unwittingly encouraged you to import certain forms of performancethat are, in effect, “secular liturgies” and not just neutral “methods.” Without us realizing it, the dominant practices of performance train us to relate to music (and musicians) in a certain way: as something for our pleasure, as entertainment, as a largely passive experience. The function and goal of music in these “secular liturgies” is quite different from the function and goal of music in Christian worship.
So let me offer just a few brief axioms with the hope of encouraging new reflection on the practice of “leading worship”:
1. If we, the congregation, can’t hear ourselves, it’s not worship. Christian worship is not a concert. In a concert (a particular “form of performance”), we often expect to be overwhelmed by sound, particularly in certain styles of music. In a concert, we come to expect that weird sort of sensory deprivation that happens from sensory overload, when the pounding of the bass on our chest and the wash of music over the crowd leaves us with the rush of a certain aural vertigo. And there’s nothing wrong with concerts! It’s just that Christian worship is not a concert. Christian worship is a collective, communal, congregational practice–and the gathered sound and harmony of a congregation singing as one is integral to the practice of worship. It is a way of “performing” the reality that, in Christ, we are one body. But that requires that we actually be able to hear ourselves, and hear our sisters and brothers singing alongside us. When the amped sound of the praise band overwhelms congregational voices, we can’t hear ourselves sing–so we lose that communal aspect of the congregation and are encouraged to effectively become “private,” passive worshipers.
2. If we, the congregation, can’t sing along, it’s not worship. In other forms of musical performance, musicians and bands will want to improvise and “be creative,” offering new renditions and exhibiting their virtuosity with all sorts of different trills and pauses and improvisations on the received tune. Again, that can be a delightful aspect of a concert, but in Christian worship it just means that we, the congregation, can’t sing along. And so your virtuosity gives rise to our passivity; your creativity simply encourages our silence. And while you may be worshiping with your creativity, the same creativity actually shuts down congregational song.
3. If you, the praise band, are the center of attention, it’s not worship. I know it’s generally not your fault that we’ve put you at the front of the church. And I know you want to model worship for us to imitate. But because we’ve encouraged you to basically import forms of performance from the concert venue into the sanctuary, we might not realize that we’ve also unwittingly encouraged a sense that you are the center of attention. And when your performance becomes a display of your virtuosity–even with the best of intentions–it’s difficult to counter the temptation to make the praise band the focus of our attention. When the praise band goes into long riffs that you might intend as “offerings to God,” we the congregation become utterly passive, and because we’ve adopted habits of relating to music from the Grammys and the concert venue, we unwittingly make you the center of attention. I wonder if there might be some intentional reflection on placement (to the side? leading from behind?) and performance that might help us counter these habits we bring with us to worship.
Please consider these points carefully and recognize what I am not saying. This isn’t just some plea for “traditional” worship and a critique of “contemporary” worship. Don’t mistake this as a defense of pipe organs and a critique of guitars and drums (or banjos and mandolins). My concern isn’t with style, but with form: What are we trying to do when we “lead worship?” If we are intentional about worship as a communal, congregational practice that brings us into a dialogical encounter with the living God–that worship is not merely expressive but also formative–then we can do that with cellos or steel guitars, pipe organs or African drums.
Much, much more could be said. But let me stop here, and please receive this as the encouragement it’s meant to be. I would love to see you continue to offer your artistic gifts in worship to the Triune God who is teaching us a new song.
Most sincerely,

Postscript to “An Open Letter to Praise Bands”

So, I guess my little “Open Letter to Praise Bands” generated some interest. I’m glad that it could be a catalyst or foil for some intentional reflection on the howof Christian worship. I won’t even attempt to address the array of responses it has generated. I’m content to let some misreadings spin themselves out. So I’m not out to police the ways I’ve been misunderstood.
However, I do think it’s important to name an issue in the background that affects how we can have this conversation: not all Christians share the same theology of worship. Indeed, my concern is that some sectors of North American Christianity don’t have much of a theology of worship at all. Many of us–including many congregations–have only an implicit understanding of what worship is, and we have not always made that explicit, nor have we subjected our assumptions to rigorous biblical and theological evaluation.
It is my passion for theological intentionality about worship that generated my book Desiring the Kingdom: Worship, Worldview, and Cultural Formation. It’s not fair to ask those who read a blog post to read an entire book, but I would invite those who both agreed and those who disagreed with my “Open Letter” to consider Desiring the Kingdom as a fuller articulation of the theology of worship behind my criticisms.
Many of the negative reactions to my missive stem from a fundamentally different understanding of what worship is. That means we are working from fundamentally different starting points. So when someone thinks that I “misunderstand” what’s happening in worship, actually I just disagree with the assumptions behind such worship.
I think this is why some have missed two crucial points in my “Open Letter”–points that were admittedly touched on just briefly. Let me reiterate them here:
1. Worship is not only expressive, it is also formative. It is not only how we express our devotion to God, it is also how the Spirit shapes and forms us to bear God’s image to the world. This is why the form of worship needs to be intentional: worship isn’t just something that we do; it does something to us. And this is why worship in a congregational setting is a communal practice of a congregation by which the Spirit grabs hold of us. How we worship shapes us, and how we worship collectively is an important way of learning to be the body of Christ. (For a helpful account of how our congregational practice of singing embodies the oneness of the body of Christ, see Steve Guthrie’s marvelous chapter, “The Wisdom of Song.”)
2. Because worship is formative, and not merely expressive, that means other cultural practices actually function as “competing” liturgies, rivals to Christian worship. In Desiring the Kingdom, I analyze examples of such “secular liturgies,” including the mall, the stadium, and the university. The point is that such loaded cultural practices are actually shaping our loves and desires by the very form of the practice, not merely by the “content” they offer. If we aren’t aware of this, we can unwittingly adopt what seem to be “neutral” or benign practices without recognizing that they are liturgies that come loaded with a rival vision of “the good life.” If we adopt such practices uncritically, it won’t matter what “content” we convey by them, the practices themselves are ordered to another kingdom. And insofar as we are immersed in them, we are unwittingly mis-shaped by the practices.
Again, there’s much more to be said about this, and a blog isn’t the venue. I do invite those who have been prompted to think about these matters to consider Desiring the Kingdom as a way to continue the conversation.
HT: http://forsclavigera.blogspot.com/2012/02/open-letter-to-praise-bands.html

9 thoughts on “An Open Letter to Praise Bands”