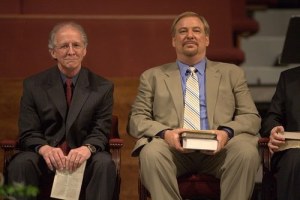 Recently, we received an email here at DefCon that I believe addressed a very valid and important question.  The reader asked our opinion on a discussion he was having with someone regarding Rick Warren, Mark Driscoll and John Piper. The question asked during his discussion was how can a Christian call any of these men a “true brother in Christ,” especially given the various concerns raised about them, even here on this blog. As the head administrator of this site, the task was mine to attempt to answer this particular question. After thinking the matter through, I responded to our reader with what I believe is a balanced and biblical stance on the matter. My desire is to share that response here on DefCon so that others who have a similar question may benefit from it. My response was a follows:

“Hello there. This is the Chris Hohnholz, the head administrator of DefCon. Thanks much for writing to us. I have given your email a lot of thought and will do my best to give you a decent answer. Before I do though, I want to make it clear that I am speaking only for myself. Even though I run this blog, I do not claim to speak for all the writers, not even the author of the article you linked. I say that as a means of ensuring that anything that I might blow it on is not conveyed to my writers.

My thought on this is that there is a difference between not supporting or endorsing a pastor and declaring that said pastor is not a brother in Christ. To give a separate example, I’m sure you are aware of the chaos James MacDonald has caused with his Elephant Room nonsense. In years past, he has been considered a respected pastor. Even folks of a reformed theology have at least considered him within orthodoxy. Yet with his endorsing pastors who are questionable, and now declaring T.D. Jakes (who is a heretic) to be within the camp, he is NOT someone we would support or endorse. However, does his current sinful behavior mean he is not saved. I do not believe we can declare that at this time. If he truly is saved, I believe the Holy Spirit will bring him into repentance. If he is not, I think we will see him walk further and further from the truth. But until one or the other happens, I will not declare he is not a brother, but I will warn folks against what he is doing.

I think much can be said of the three pastors you have written Todd about. With Warren, I really worry about him because everything he is about is antithetical to the Bible. I think his smiling and charismatic personality carries with it a dangerous man-centered message that will definitely lead people and ministries astray. That alone makes me wonder about his salvation, but I would stop short of that because I simply haven’t seen him teach anything that is directly heretical. Much the same with Driscoll. He teaches orthodox messages, but his willingness to taint that message with foul language, to give graphic sexual messages and his unbiblical “visions” from God make him someone I wouldn’t endorse at all. But I really don’t know about him not being a brother. Is he simply just ignorant on these things or is he deliberately teaching things that will one day bear out as heretical. I can only say that we should be warning folks against him. Piper is the one who really perplexes me. He has preached so many great and godly messages that still continue to edify the saints. Yet, he is willing to lock arms with folks like Warren, he is willing to appear in conferences where contemplative prayer is going on without so much as a peep in refutation. He is giving those folks a platform that they never should have. I do believe Piper is a brother, but he is flat out wrong in what he is doing. As such, I don’t support what he is doing.

I do not know if this answer helps you in any way, but I believe that until these men either establish themselves as heretical or they repent and prove themselves as faithful brethren, our best bet is to warn against what they have said or done, but to reserve judgment of their state of salvation.

Again, I am thankful for your writing to us and am equally grateful for your support of our blog. May God bless you.

37 thoughts on “Can We Call Them Brothers in Christ?”