This post is a quiz! Most Christians acknowledge a moral law at work in all men, seeing this in myriad places 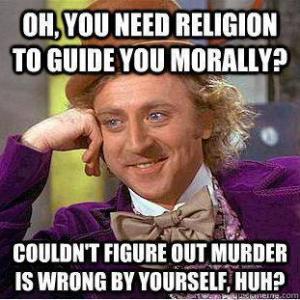 in Scripture – most explicitly, perhaps, in Romans 2: For when Gentiles, who do not have the law, by nature do what the law requires, they are a law to themselves, even though they do not have the law. They show that the work of the law is written on their hearts, while their conscience also bears witness, and their conflicting thoughts accuse or even excuse them.

Here’s the quiz: Where is the moral law defined in Scripture and when was it given to man? Please reason your answer to this two-part question with the Word of God. The goal here is to stir our thinking and draw us to Scriptures, not relying solely on what men have taught us.

I’ll tell you what think after some of you answer. Have fun!

Thanks to all who participated! It’s not likely what you will read next will satisfy everyone, but please read carefully and seek to understand what is written.

One of the problems we must all acknowledge is that the Bible does not provide a definition of “God’s Moral Law”, nor does it use that term in describing it. This is where many presuppositions come into play.

Three statements for your consideration: 1) There is a moral law from God that has been written on every soul, leaving no person with an excuse to claim he did not know. 2.) This moral law was given to man at the Fall, not at Creation. 3.) This moral law shines through the Decalogue, is not defined nor contained in the Decalogue.

As for the first point, I think the citation from Romans 2, above, proves that well enough. Those who want to argue against this point will have to be very calm and biblical to be heard. As for the second point, consider the biblical record: before the Fall, Adam and Eve had fellowship with God and knew the goodness of God. It was not until after Adam sinned that they had knowledge of both good and evil (Gen 3:7 and 22). As Paul wrote in Romans 7, knowledge of the law (here, he is talking about the Decalogue, which applied the Moral Law to the Hebrews) brings knowledge of sin. Adam knew not sin until he sinned. Since he sinned, he had need of the Moral Law. God wrote His Moral Law on Adam’s soul and Eve’s when He banished them from the Garden.

Thirdly, the Moral Law of God shines through the Decalogue, which applies that Law to the Hebrews, wrapping it in ceremonial language that applies to them alone. If one looks at the biblical context and direct biblical commentary about the Decalogue, there is no reason to claim those “tablets of testimony” as binding on all men everywhere. The 17th century theologian John Owen observed this in his Works, 22:215:

The nature of the decalogue, and the distinction of its precepts from all commands, ceremonial or political, comes now under consideration. The whole decalogue, I acknowledge, as given on mount Sinai to the Israelites, had a political use, as being made the principal instrument or rule of the polity and government of their nation, as peculiarly under the rule of God. It had a place also in that economy or dispensation of the covenant which that church was then brought under; wherein, by God’s dealing with them and instructing of them, they were taught to look out after a further and greater good in the promise than they were yet come to the enjoyment of. Hence the Decalogue itself, in that dispensation of it, was a schoolmaster unto Christ.

But in itself, and materially considered, it was wholly, and in all the preceptive parts of it, absolutely moral. Some, indeed, of the precepts of it, as the first, fourth, and fifth, have either prefaces, enlargements, or additions, which belonged peculiarly to the then present and future state of that church in the land of Canaan; but these especial applications of it unto them change not the nature of its commands or precepts, which are all moral, and, as far as they are esteemed to belong to the Decalogue, are unquestionably acknowledged so to be.

I share Owen’s basic point, but differ in some details. What we see in Exodus 20 is not equal to the moral law, but communicates that law in the context of the covenant God made with Israel. I think there are “prefaces, enlargements, or additions, which belonged peculiarly to” Israel in the 2nd through 5th and the 10th  words of the tablets. Read what is recorded in Ex 20 and compare it to Deut 5 and ask yourself if what Owen and I say is true. Then realize that God’s Moral Law must be discerned by careful reading, studying and prayer. Failure to do this has caused many to blithely assume the Decalogue is equal to God’s Moral Law (something first proposed by a Roman Catholic in the 12th century). The difficulty in interpreting and applying the Decalogue as God’s Moral Law can be seen in the last 1,000 years of church history.

If there is interest, I would be willing to post a four page article I wrote last year as a result of studying this question in context of how the 1689 London Baptist Confession addresses it.