Brief introduction — I had the privilege of meeting Jim when he became a member of the church my father started at RAF Fairford, England back in 1984 or 1985. Jim served and grew in that mission work while serving in the US Air Force. He would later visit me at Northland Baptist Bible College while looking at schools where he could train for the ministry. Jim lives on the East Coast now with his dear wife, and he continues to be a faithful Bible teacher as he strives to become more like Jesus Christ. Here is his testimony. It has been a blessing getting back in contact with Jim and renewing our friendship.

When I was nine years old my two sisters and I were playing in our front yard when a church bus driver pulled alongside the curb and asked us if we would like to start going to church on the bus.  After getting our parents approval we started going to a Baptist church.

Sunday School was fun for me because we played games and had snacks.  There was no such “monster” as children’s church in those days and we would sit together as “bus kids” with the bus captain in the adult service.  I didn’t pay much attention to the pastor except on occasion and I would go forward during the altar call telling the pastor that I do bad things and he would tell me that we all do bad things and he told be to back and sit down.

Eventually our parents began to attend the Sunday morning services and we sat with our parents rather than the bus kids.  At this point and time I was now ten years old and one particular Sunday morning during the adult service I was pestering my sisters.  My dad looked at me and told me to shut up, sit straight, and pay attention to the pastor.

My dad was a strict father and I knew that there would be serious consequences if I didn’t do what he told me to do.  I shut my mouth and sat up straight, and paid sincere attention to the pastor.  As he was faithfully preaching the gospel about sinners dying and going to hell and Jesus having died and shed His blood to save us the Holy Spirit of God convicted me as a lost sinner.

Now I didn’t want to go to church anymore because I was running from God and myself.  A few Sunday’s after my initial “conviction” as a lost sinner the Spirit of God was impressing upon me that I needed to get saved and what was I going to do about it?  I had this all happening inwardly and I started to question whether this was really God or just “all in my head.”  I decided to “test” God and find out if this was really happening or not. 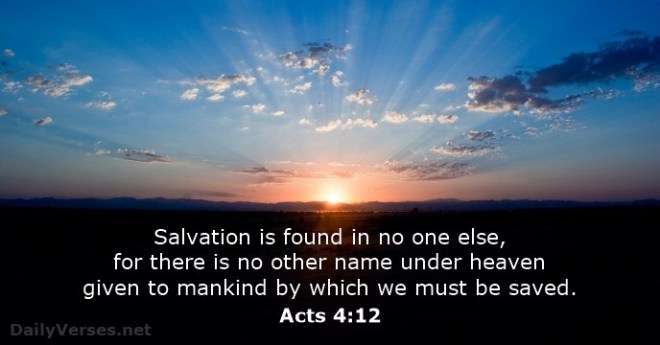 As the Lord was impressing upon me as to what I would do I said, “I’m going to wait until I’m grown up, and God impressed upon me that if I wait until I am grown up that I’ll grow up hard-hearted and lost.  Again, the Lord was impressing upon me “what are you going to do?”  I still questioned the validity of what was occurring and I said within myself, “I’m going to wait.”  It was then that I sensed the Holy Spirit’s presence leaving from me and I knew that this was real.

At that moment as I was still sitting in the pew I surrendered myself to Jesus Christ and acknowledged myself as a sinner and with a true heart of repentance I placed my faith in Jesus Christ and His shed blood to wash my sins away.  I didn’t understand at that moment that I had indeed been saved right then and there.  I thought that I had to go forward to the altar to get saved.

When the altar call was given I couldn’t get there fast enough and when the pastor asked me why I was there I told him that I needed to get saved.  He said, “excuse me?”  I cried, and told him that I needed to get saved and that I didn’t want to go to hell.  We knelt down at the altar and he did not tell me to repeat after him.  He prayed that God would saved me and as I was praying in agreement the Holy Spirit confirmed within me that I was already saved in the pew.

When the pastor and I stood up we faced the congregation and he announced that I had just gotten saved.  The pastor looked at me and asked me, “now that you’re saved what do you want to do with your life?”  I told him, “I’m only ten years old and I don’t know what I want to do with my life.”  The pastor encouraged me to tell the folks something since I now know Jesus.  My reply was:  “I just want to do what Jesus wants me to do.”

To God be the glory to save a sinner such as me!

One thought on “Testimony of Salvation”