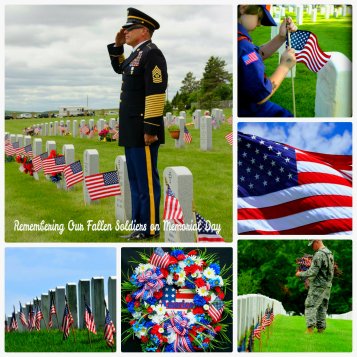 Today is a sad Memorial Day!

It is sad because of the numbers of people who were willing to give their all for what they thought was the cause of freedom. It is sad because of the many who have been duped into believing what our government has chosen to feed us through popular media formats. It is sad that tens of thousands have had to die and are still dying in wars that we have no business being involved with. It is sad that our thanks seems far too little for those who died.

It is sad that old men will sit in their comfortable offices and dream of new battlefields for our children and grandchildren to fight on. It is sad that fighting against tyranny did not stop with the destruction of Nazi Germany. It is sad that we must be on guard against our own government whose leaders no longer pray for wisdom as past presidents have done. It is sad when many in our country have no shame in voting for a person who is a traitor to our military.

It is sad that our freedoms do not extend to the 60+ million human babies who were murdered and whose blood cries silently from their trashcans across this once great land. Currently about 1% of the population serve in the military compared to around 12% during World War II.

It is sad that low side to high side, that means that through abortion, doctors who swore the Hippocratic Oath not to harm or kill have killed between 600,000 to 7.2 million future soldiers, airmen, sailors, marines, and coasties just since 1973! What a sad Memorial Day. The TOTAL number of US population killed since 1775 is just 1.4 million! The TOTAL number of military killed since 1973 is just 9,610.

Yes, today is Memorial Day again, but it is a sad one for far too many reasons. May God grant forgiveness because we certainly do not deserve mercy today.