This morning, as I listened to Greater Vision sing “Just One More Soul,” I began to reflect once again on the message of that song. It was the perfect encouragement I needed, as I prepare for another year of conferences and ministry. For those who don’t know, I have the blessing of traveling with my brother as he ministers to people and challenges them to examine their worldview and make sure everything they do is from a Biblical perspective.

Although he has done some street witnessing, prison ministry, etc., most of our outreach is to professing Christians, and those are often the ones I have the greatest burden for. In our travels, we meet a lot of neat people, some of whom are on fire for the Lord and are striving to raise their children to have that same fervor. But many seem to be stressed and depressed, weighed down with the things of this world. Then there are those who are just biding their time, waiting for the service to be over so they can go get together with their friends or go home and watch TV. 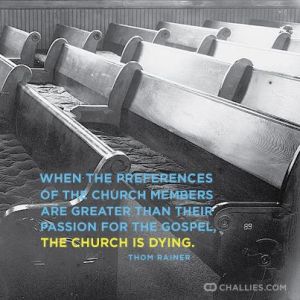 It seems like so many today don’t really care what the Bible teaches. “If it feels good, do it” still permeates our society. If you want to watch movies filled with sex and violence, that’s fine. It’s just a movie. If you’re tired of your wife and you find someone else who will make you “happy,” go for it. But let me interject here that nowhere in the Bible does it say that God wants us to be happy. It does say He wants us to be holy, and that is missing from the lives of so many who claim to be saved.

Hebrews 6:4-8 says, “For it is impossible, in the case of those who have once been enlightened, who have tasted the heavenly gift, and have shared in the Holy Spirit, and have tasted the goodness of the word of God and the powers of the age to come, and then have fallen away, to restore them again to repentance, since they are crucifying once again the Son of God to their own harm and holding him up to contempt. For land that has drunk the rain that often falls on it, and produces a crop useful to those for whose sake it is cultivated, receives a blessing from God. But if it bears thorns and thistles, it is worthless and near to being cursed, and its end is to be burned.”

I believe this speaks to those who say, “Lord, Lord, did we not do all kinds of things in Your name?” And, yet, the end result is that they did not live for Him on earth, so He had to turn them away from the gates of Heaven.

As I write this, my spirit is heavy. I see a world lost and dying, and I feel helpless to do anything about it. The truth is, however, that I can pray. I can live a life that pleases God so that He can use me for His glory. I can be faithful in the little things He has entrusted me with so that He can eventually trust me with bigger things. I can draw nearer to Him every day so that His voice becomes ever clearer. The answer is not to give up, but to press on with more determination than before.

God is not willing that any should perish, but that all should come to repentance, and this repentance must begin in the house of God. You may have sung as a child, “Lord, send a revival and let it begin with me.” May that be our prayer today. If the church begins to see true revival, I believe it will spread to the rest of the nation. Lord, hasten that day!

A good friend shared a Southern Gospel song with me this past week. It is one that I cannot ever remember hearing, although the group that sings this song is one I listened to for many years. The Southern Gospel group is called Greater Vision. For your reference, I have included the lyrics below before I share some additional thoughts.

1) Preacher I’d say it’s been a while since you heard this request,
but my spirit is tired and I need rest.
I want to hear from Heaven a clear word from God,
A sermon of conviction straight from the heart.

2) I’ve been hearing other preachers say I don’t have to change.
The most eloquent of speakers tell me I’m okay.
But it hasn’t eased my conscience and I know it’s not the truth.
So when you stand before us, can I count on you?

(Chorus) Oh Preacher, you say you want to be my friend,
don’t be afraid to call my sin what it is.
And Preacher, tell me I can overcome,
but it’s only by the blood of the Lamb.
Don’t tell me like I wish it was, Preacher tell me like it is.

(bridge)
Life is quickly passing, the world is fading fast
and the foolishness of preaching is the only hope we have.

Regardless of whether you like Southern Gospel Music or not, there are still pastor-teachers who get up every Sunday or throughout the week and pray that today would be the day they heard such a song from those in their congregations.

Sadly, this is far from truth. Many of you, who are regulars here at DefCon, know some of our story. In early 2013, I was called to pastor what I thought was a conservative, evangelical Bible-believing church in north-central California.  It took less than 2 months to ascertain that several of the “elders” were not even true believers. One was living in open sin, and they took great offense at my preaching that salvation is by grace through faith alone in Christ alone.

A few months later, just shy of 70% of the congregation voted against taking a stand on the issue of homosexuality and homosexual marriage. Obviously, this was not a congregation that was interested in singing the lyrics of this song. They did not want sin called what it was. The men who claimed to be elders and who were supposed to be leading spiritually and watching over the flock had little to no interest in the truth of God’s Word.

Sundays come and Sundays go, and far too many faithful ministers prepare messages wondering who will show up and whether they are even upset from the Word that was ministered the week before. On the other hand, there are hirelings posing as shepherds who refrain from speaking boldly because they are afraid of losing a paycheck. Such individuals have NO BUSINESS being in the pulpit.

While there are many other things that are on my heart, I want to use this post to address those who normally sit in congregations each week. Let me tell you what a true pastor looks like.

For those true pastors who have refused to bow the knee to the gods of this world and the sinful desires of congregations, you are loved with an everlasting love. Your rewards will be few down here. Your body may be worn down as you strive to juggle all of your efforts to show Christ to others, but strive to remain faithful as we look toward a land whose builder and maker is God. True pastors, you have a high calling.

True believers, you have a responsibility to pray for your pastor, to support him, to love him, and to realize that he is only human. Every message will NOT be easy to hear. He is tasked with the incredible and heart-breakingly overwhelming responsibility of protecting you from the dangers of all the heresy and false teaching that is spreading like wildfire throughout evangelicalism.

True believers, it is easy to sing songs like this when they have catchy tunes or lyrics, but how often have you actually walked up to your pastor and told him such words? How often have you said, “Preacher, Tell Me Like It Is!” and then instead of getting offended and looking for a new church next week prayed and asked the Lord to help you be a faithful Berean Christian who will stand for truth even when it is not popular?

Eph. 1:4-6 ESV -- Even as he chose us in him before the foundation of the world, that we should be holy and blameless before him. In love he predestined us for adoption to himself as sons through Jesus Christ, according to the purpose of his will, to the praise of his glorious grace, with which he has blessed us in the Beloved.