Recently, I have been reading through the wonderful allegory by John Bunyan, The Pilgrim’s Progress. We were also blessed to obtain an audio dramatization from Master Books that we would highly recommend to anybody who loves this story.

One scenario stands out in my mind and I have been pondering for some time now. The characters involved in the scene are Christian and Pliable, both of whom come from the City of Destruction. The first carries a weight of sin upon his back and is plodding on the way to the Celestial City as quickly as he is able, while the latter has nothing that seems to be holding him back.

Pliable is a clear reflection of the defining of his name. Pliable means easily influenced or easily bent. From the beginning, we know that he is a follower and not a leader. He follows Obstinate in trying to get Christian back to the City of Destruction, but quickly changes his mind when he hears of the wonders of what is in store for those who reach to the Celestial City. 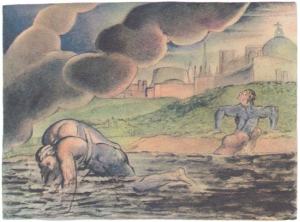 As I considered Pliable, I thought of Christian’s early attempts at seeking to be an evangelist and how similar it is to much of what we find in evangelical circles today. Christian’s methods of reaching the unconverted changes later in the story, but to begin with, they are far from appropriate and certainly not Biblical. Let’s us think about some of the problems with Christian’s approach to reaching Pliable.

1) Pliable is not in dire straits as is Christian. As mentioned previously, Christian has become aware of the burden of sin, but Pliable has not. No person has ever come to Christ who has not been first brought to the awareness of the danger he or she is in. If they do not believe they are fleeing from the wrath of God, then there is no true conviction.

2) Pliable is easily swayed first from Obstinate’s viewpoint and then to Christian’s, and it is not long before he returns to the City of Destruction because he does not like what he finds on the path to the Celestial City. A person who is convinced to follow another, other than Christ, will not follow for long until another comes along with a more persuasive argument. We will be like King Agrippa who told Paul, “Almost you persuade me to be a Christian.”

3) Pliable then listens to the wonders of what heaven will be like and becomes enraptured with all the glories that will soon be his. It is in this way that Christian makes a mistake. He seeks to share with Pliable that which is designed to gain the attention of a worldly person, but he forgets some of the most important factors of evangelism. He fails to address that Pliable is not aware of his sin, he is not aware that his city will soon be destroyed, and he is not aware that trials and tribulations are the lot of all who live godly in Christ Jesus.

4) Pliable soon learns the reality of the Christian life and he is not impressed. In seeking to follow the way of Christ, he, like millions today, thought that this would be his best life now. He thought that there were no troubles to assail him and that life would become easy. He sought to come to faith for the wrong reasons, namely, because of what he thought he could get, and not because of what had already been accomplished through the death, burial and resurrection of Jesus Christ.

5) Pliable falls into the Slough of Despond which Bunyan describes like this:

This miry Slough is such a place as cannot be mended; it is the descent whither the scum and filth that attends conviction for sin doth continually run, and therefore is it called the Slough of Despond: for still as the sinner is awakened about his lost condition, there ariseth in his soul many fears, and doubts, and discouraging apprehensions, which all of them get together, and settle in this place; and this is the reason of the badness of this ground.

This became too much for Pliable for he cannot stand to be mired in such filth. Instead of fleeing to the cross as Christian does, Pliable immediately climbs back out of the Slough and makes a beeline for the City of Destruction. Christian learns that for all to be well with his soul, he must flee from his sin. It is only when our sins are nailed to the tree that we can know the joy of forgiveness and no further condemnation.

Pliable is like many today who think that they can come to Christ with their own good works or apart from the work of the Holy Spirit. For those who know Christ, we must seek to share the truth of the Scriptures that no man comes to Christ who does not realize the depths of his sin and the matchless wonder of the Savior. Truly, Pliable’s wrong motives for wanting to be a follower of the Way produced no lasting joy. Fellow believers, if we use wrong motives to seek to entice people to follow Christ, we cannot be surprised when we find that we have only made false converts.

One thought on “Wrong Motives Produce No Lasting Joy”