I believe this post that I originally wrote three years ago is even more applicable today. I have edited a few parts. This Resurrection Sunday, I pray that all true believers will be encouraged.

What is society afraid of?

What is Christianity afraid of?

What are you afraid of?

Society is afraid of the truth. Christianity is afraid of being offensive. As for what you are afraid of, that is something only you can answer. My goal is that this post will have you thinking about why you do what you do.

Easter is a great time to bring this subject matter to light. Let me explain. For almost 40 days, many have been practicing the idea of “Lent.” They have no clue why they do it except that it is part of their religion. Many have not a single thought about God, but want to make sure that they cover all the bases just in case. They will live like the world every single day, except for a special day or two in the entire calendar so their “God” box will be checked. This leaves them feeling good about themselves so they can have a sense of being a “Christian.” Yet, the heart condemns those who think they can please God by pleasing themselves.

For years, I have worked with many people who can live, talk, and act like a minion of the evil one every single day. Yet, in one swift moment, as soon as they find out that you are a believer, they can and will proclaim, “Oh, I am a Christian.” The follow-up questions are quickly followed by silence until it grows awkward and the person soon finds something else with which to occupy their time. Or, in the better scenarios, you hear the response of, “Well, that is private and is just between me and the Man upstairs. Besides, who are you to judge me? The Bible says, “Don’t judge!”

What types of questions might we ask of any individual with whom we may meet? This could be another family member, a friend, a neighbor, or a work colleague.

“Where do you attend church? Where are you in fellowship each week with other believers seeking to remind the world that we are not of this world, but that we are just passing through?”

“What about your relationships? Are you married or just living in a way that goes contrary to the Word of God? Why would you want to be living with somebody who does not share your views, if you are a true believer?”

“Do your words and actions reflect that you are different, or do you strive to be just like those around you? Would your Sunday appearance give forth the reflection of a hypocrite, or a genuine believer longing to be more like Jesus Christ despite the difficulties of living a life of holiness?”

Despite the awkward silence or vocal calls about not judging, Easter and Christmas find more people claiming the name of Christ than any other time of the year. They are willing to give up things for Lent, but not for Christ. Far too many think that they are meriting favor or grace with God by giving up chocolate, meat, intimacy, or whatever.

When the forty days of Lent arrives, people flock to services like Ash Wednesday, Maundy Thursday, Good Friday, or Easter Morning service never to be seen again til Christmas. Yet, for all the fasting or giving up of things, nothing has changed in their lives. They produce the same cursing, same vulgarity, same illicit relationships, and not one thing to indicate that they have actually spent time with Jesus Christ and are a new creation.

As for society, just look at our workplaces. Lies, deceit, and dishonesty rules the day. Few are willing to take a stand, and when something is said as a reminder, those speaking up are quickly removed. What does this have to do with Easter time? Simply this. These same practices and philosophies have moved from universally being accepted as part of the workplace to being fully accepted in the circles of so-called Christianity.

Let me be very blunt!

Easter is NOT about a bunny that lays eggs!

Easter is NOT about furry chicken that lays candy!

Easter is NOT about egg hunts, bouncy castles, lattes, and clowns on a Sunday.

Easter is supposedly to revolve around the holy Person of Jesus Christ. The reminder of the week prior to the Sunday should be a solemn reminder of the price that was carried on the cross. The wrath of God the Father was poured upon His only begotten Son because of the sins of mankind. It pleased the Father to bruise and crush His own Son because of the cursing, the vulgarity, the illicit relationships, and all sin that separates us from a holy God.

Christianity has allowed society to tell us that Easter has nothing to do with Jesus Christ. We are not allowed to speak of Jesus Christ and His sacrifice on Calvary, but we can speak the religion of secularism and commercialism all day long. Nobody has one single problem with that. The world and the church have now merged in such a way that it is almost impossible in most circles to know where one starts and one ends.

If you are a true believer and have placed your faith in Jesus Christ alone for your salvation, then this next section is a solemn reminder and exhortation to you and your family.

This Sunday, we have the privilege of celebrating the most glorious event that has ever transpired in all of human history. Nothing can top what took place almost 2000 years ago. Let me summarize what this Sunday SHOULD mean to you.

1. He laid aside His glory as the all-powerful majestic King of all Creation and came down to this sin-cursed earth.
2. He was born in a lowly stable showing the stark opposite of what He had enjoyed for all of eternity past.
3. He was welcomed by magi as well as lowly shepherds who guarded the lambs that would be sacrificed each Passover.
4. He grew in wisdom and stature and lived in obedience to the commands of both His earthly parents and the will of His heavenly Father.
5. He spent 3 ½ years walking the dusty roads of Galilee, Judea, and Samaria preaching the kingdom of heaven.
6. He was betrayed and abandoned by every one of His disciples.
7. He, the King of all Creation, was beaten, mocked, scourged into a bloody mess, and then hung between earth and heaven.
8. He bore upon Himself our sins and was ultimately forsaken even by His own Father in heaven because God the Father could not stand to look upon sin.
9. He became sin on our behalf and became clothed with our filth so that we would be clothed in His righteousness.
10. He died and was buried like a common criminal in a borrowed tomb.

But Sunday was coming!

There should be no doubt that the disciples had contacted the local businesses to ensure that bouncy castles were set up outside the tomb to celebrate what was going to happen. There should be no doubt that the apostle Peter, having just denied the Lord three times earlier that week, was the instigator in setting up an Easter Egg hunt in order to entice the children of the murderous hordes to come to their service so that they would have greater numbers. There should be no doubt, based on what we see in modern Christianity, that the early New Testament church was prepared with the latest jokes and frivolity after having just seen the King of all Creation die and be buried.

Dear brothers and sisters, do you see the hypocrisy in the above statements? If it does not bother you to see the entertainment on any given Sunday in church, then it is time to examine your heart to see whether you are truly of the faith. If the only thing you can think of is, “Well, what you say may be true, but the Bible says not to judge,” then you have failed miserably to comprehend the solemnness and the seriousness of what this Sunday is all about. If you think that Easter is about the bunny and candy eggs, then your pastor and church have failed in their responsibility to teach you the truth of the gospel.

Easter is NOT about you and your perceived needs! 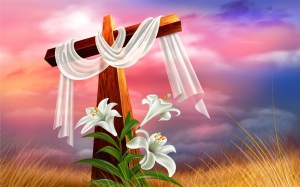 My purpose is not to judge the world with my words. My thoughts are to be a beacon in the wilderness shining a light that points others to Jesus Christ alone. My desire is to be a gentle reminder that true believers are called to be different, not the same as the world.

We are NOT replacing Easter in our home, but we will joyfully, reverently, and humbly celebrate –

He is risen! He is risen indeed! Blessed be the name of the Lord! And can it be that He died, was buried, and rose again for me!