The concept of civil disobedience is not new. Neither is the question of how far a government 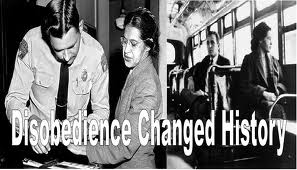 We must be informed by the Word of God – not our personal preferences and presuppositions.

World Magazine recently published an article focused on this question, you can read it here. Here’s a small excerpt:

Does submitting to civil authorities mean obeying laws that are immoral? We are commanded by God to share the gospel. What if a law barred us from doing so, even privately? We see that obeying government authorities isn’t absolute. It should be clear to Christians that unless there is legal recourse against obeying a law that compels us to sin, we are justified in disobeying it. Is it a sin to offer employees “mini-abortion drugs”?

It is clear from Scripture that Christians are able (obligated, I contend) to disobey the governing authorities if proclamation of the Gospel is outlawed – see Acts chapter 4. Is that the right standard to compare other issues to, as if they become justifiable since Gospel proclamation is?

This question of submitting to political authority has been addressed here at Def Con in the past – see this post as brother Conrad Mbewe examines part of 1 Peter.

The question of disobedience to the governing authorities must be anchored in Scripture – as with anything of import. If God has given us instructions, we who claim to be His must submit to what He was revealed to us! Do you have a pet issue (perhaps home schooling) that would cause you to reflexively rebel against the governing authorities without seeking wisdom from God in humility?  We must be on guard against these issues that are close to us – for it in these that we are most vulnerable to slip into disobedience to God, thinking we are merely exercising our rights – forgetting that we are aliens in this present age, with our citizenship and home in a city whose builder is God.

So – is it right and honorable to refuse to provide medical insurance that covers abortion? Certainly! The law is set up to allow people to pay for non-compliance. It is a very high price tag for businesses that might cause them to completely change their business model (contractors or part time employees) or liquidation. But think on this: the Bible does not reveal God’s will for man-made institutions. He has created government, family, and the church. Those institutions have responsibility before God as does each individual. A Christian who owns a company has a responsibility before God and he has the same obligation to seek wisdom from God’s Word on this as with personal issues. (Not being addressed in this article are those hell-bound folk who will also answer to God and have no grace to cover them on Judgment Day.)

The Christian that wants to participate in civil disobedience ought to step back and think. Rebellion is as witchcraft. Failure to rightly submit to the governing authorities is rebellion, is as witchcraft. Is that something we want to play games with? 1 Peter 2 gives a “Reader’s Digest” version of God’s commandment:

Be subject for the Lord’s sake to every human institution, whether it be to the emperor as supreme, or to governors as sent by him to punish those who do evil and to praise those who do good. For this is the will of God, that by doing good you should put to silence the ignorance of foolish people. Live as people who are free, not using your freedom as a cover-up for evil, but living as servants of God. Honor everyone. Love the brotherhood. Fear God. Honor the emperor.

Let’s wrap up with the obvious text, Romans 13, which includes this nugget: “whoever resists the authorities resists what God has appointed, and those who resist will incur judgment.” Read the whole chapter, with a humble attitude. I know it’s easy to despise a government that does not rule the way I want it to. I like my elected officials to have an affection for and submission to the Constitution (at the national level) just like I like my church elders to have an affection for and submission to the Scriptures. But civil governments are mostly occupied by folks not reconciled to God, while church leaders ought to be – and therefore, subject to stricter standards. Most of the things that cause me to consider civil disobedience do not meet the biblical test – they reflect my fleshly desires or my innate sense of self-righteousness. How do you see yourself?

Okay. Your assignment. Voddie Baucham preaching on Romans 13 in two sermons. Listen to part one and part two before commenting. It wouldn’t hurt to listen to Conrad Mbewe’s message from 1 Peter (at the link early in this article). Then let’s discuss like mature, humble blood-bought children of the Creator God and Ruler of the universe.

16 thoughts on “Civil Disobedience and the Christian”