I just read an excellent article from NCR on Chuck Colson’s position on the issue of Mitt Romney’s Mormonism and its pertinence in American politics. Although the author of the article is Roman Catholic (which leads him to some erroneous conclusions like suggesting that Romanism is Christian), he does make some great points about this issue that Evangelical Christians should be cognizant of, while simultaneously pinpointing some of Chuck Colson’s poor misuse of Scripture.

Here’s an excerpt from the article:

Mormons are polytheists. They believe that the Father, the Son and the Holy Spirit are three different gods,that there are countless other gods besides, and that somewhere there is a “God the Mother” with whom the Father celestio-biologically reproduced Jesus.

Further, they believe that we are the same species as the gods and that by being a good Mormon you can grow up to be a divinity with your own planet of billions of people worshipping you. 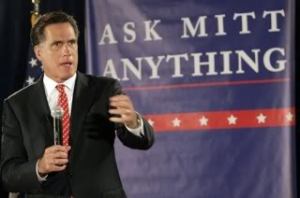 They are therefore polytheists of a type that goes way beyond ancient paganism. Back then apotheosis was reserved for the emperor or the pharaoh, but more importantly polytheists did not claim to be Christians, much less to be the only true expression of Christianity with actual Christianity being a theological perversion.

You can read the entire article here, and as usual, the Mormons have flooded the comment section of the article.

Should a Christian vote for Mitt Romney?

Should Christians vote for the lesser of two evils?

A shocking realization if a Mormon becomes president of the United States.

An article from Mormon Coffee offers the following six things you’d expect to see if Mormonism were true. You can read the entire article here.

If Mormonism were true…

1. … Joseph Smith would have been able to consistently, accurately, remember his visit from two separate supernatural beings, God the Father and Jesus the Son. We now know that is not the case (for more info, see here, here, and here).

2. …the LDS “truth” that there are at least two gods, our Heavenly (spirit) Father, whose name is Elohim, and Jesus (Elohim’s son), whose spirit-name is Jehovah, would have been consistent since Mormonism’s beginnings. Instead, the Book of Mormon, Joseph Smith’s first work, preaches that there is only one (modal) God (see Alma 11:26-31, 2 Nephi 31:21, Mosiah 15:1-5 for example). Joseph Smith originally taught that Jesus’ father’s name was Jehovah, and Brigham Young, Mormonism’s second prophet, taught that Heavenly Father was actually Adam, the first man on earth. Joseph also originally taught that of the three members of the “Godhead,” only Jesus had a body. That of course is no longer Mormon belief.

3. …the Book of Mormon, a book that is supposed to contain the “fulness of the gospel,” would teach on the plurality of gods, man’s potential for godhood, eternal marriage in Mormon temples, baptism for the dead, three degrees of heaven, and the other beliefs that separate Mormonism from orthodox Christianity. Not only does the Book of Mormon not teach these things, it and the other LDS scriptures frequently contradict current Mormon truths, and each other.

4. …there would be evidence of a large battle on or around the Hill Cumorah in New York, and other archeological evidence to support the notion of Book of Mormon life on this continent. Instead, LDS apologists are still struggling to locate and identify possible Book of Mormon geography sites (see also here and here).

6. …when portions of the papyri used to create the Book of Abraham were recovered and translated, the text would be very similar to what Joseph had written. Instead, just as you would expect if Joseph Smith had bought merely a couple of random mummies that had been found in an ordinary catacomb from a man with many mummies and scraps to sell, the papyri has been discovered to be common Egyptian funerary documents.

“Will you love your brothers or sisters likewise, when they have committed a sin that cannot be atoned for without the shedding of their blood? Will you love that man or woman well enough to shed their blood?”

“If you want to know what to do with a thief that you may find stealing, I say kill him on the spot, and never suffer him to commit another iniquity.”

“Men, who have been warned and forewarned, but who will associate with the wicked and take a course to commit whoredom, and will strive to lead our daughters and our wives into the society of poor, wicked curses, with a view to gratify their cursed passions; we will take them and slay them before this people.”

As the debate among Christians continues on whether or not they would (or should) vote for a Mormon for president, and whether or not a Mormon president would be a good thing for our nation, there is a concern that has gone virtually unmentioned that I’d like to bring to your attention.

During the early years of The Church of Jesus Christ of Latter-day Saints (LDS), a doctrine was taught (and practiced) that essentially gave Mormons the divine right to take another man’s life, believing not only that it was sanctioned by God, but that by doing so they were doing the victim a favor.

“There are sins that men commit for which they cannot receive forgiveness in this world, or in that which is to come, and if they had their eyes open to see their true condition, they would be perfectly willing to have their blood spilt upon the ground, that the smoke thereof might ascend to heaven as an offering for their sins; and the smoking incense would atone for their sins, whereas, if such is not the case, they will stick to them and remain upon them in the spirit world. I know, when you hear my brethren telling about cutting people off from the earth, that you consider it is a strong doctrine; but it is to save them, not destroy them.”

This Mormon doctrine, known as Blood Atonement, calls for the murder of those who commit sins that the blood of the Mormon Jesus can’t cleanse.

“It is true that the blood of the Son of God was shed for sins through the fall and those committed by men, yet men can commit sins which it can never remit.”

Mormons actually believed that they were doing what Christ could not do; namely, saving a sinner’s soul. In this upside down world of Mormon atonement—which is completely antithetical to God’s plan of redemption as revealed in the Bible—even King David was unable to be fully forgiven by God for his sins and had to pay for his own sins in Hell.

According to Mormonism, even the sin of adultery could not be atoned for by God’s Son, and was cause for men and women needing their own blood shed:

“Suppose you found your brother in bed with your wife, and put a javelin through both of them, you would be justified, and they would atone for their sins and be received into the kingdom of God. I would at once do so in such a case; and under such circumstances, I have no wife whom I love so well that I would not put a javelin through her heart, and I would do it with clean hands. . . . There is not a man or woman who violates the covenants made with their God, that will not be required to pay the debt. The blood of Christ will never wipe that out, your own blood must atone for it.”

Not surprisingly, like many early Mormon teachings that later Mormon leaders felt were politically expedient to downplay, deny, or reverse (like racism, Adam was God, polygamy, the Mormon god’s sexual encounter with Mary, spiritual vegetables, people living on the moon, people living on the sun, etc.), their doctrine of Blood Atonement eventually just went away.

So, what bearing does this have on whether or not a Mormon is elected president? And how is the doctrine of Blood Atonement that’s no longer practiced (at least by the mainstream denomination of Mormonism) germane to American politics? And why should we be concerned about it now?

The answer lies in the reason they don’t practice it.

– Bruce R. McConkie as recorded on page 93 of his book Mormon Doctrine (1966 edition)

If either Mormon presidential candidate Romney or Jon Huntsman is elected president of the United States, then the civil and ecclesiastical laws will be in the same hands of the LDS organization, thus, there would be nothing preventing them from lifting their moratorium on shedding the blood of sinners. And, after all, they would be doing a great service to those caught up in sins that the Mormon Jesus simply can’t redeem them from.

But there is one thing that will stop them from following through with the words of their own prophets concerning Blood Atonement: Their insatiable appetite to protect the façade that they’re actually Christians.

Should a Mormon be elected president, the largest obstacle to their reinstitution of Blood Atonement would be that it would gravely hurt their proselytizing efforts. And as anyone who’s studied Mormon history knows, modern mainstream Mormonism will sacrifice their former principles and doctrines anytime it becomes politically expedient to do so. When times change, so does the mind of Mormonism’s god.

Modern Mormons have worked too hard to distance themselves from the uncomfortable teachings of their past prophets, while simultaneously (and ironically I might add) tirelessly working to reinvent themselves to appear to the unsuspecting and undiscerning as Christians, (the very Christians—and Christian faith—they consider apostate).

If the LDS organization loses converts it loses money. I don’t believe that the current LDS propaganda machine would do anything to jeopardize their new mainstream image, but with the “civil and ecclesiastical laws” being “administered in the same hands” the ban from practicing Blood Atonement would be gone, and that is a more frightening prospect than a promised tax hike.

The Mormon doctrine of Blood Atonement as taught by Brigham Young

The Doctrine of Blood Atonement as taught by the Mormon organization

“The wickedness and ignorance of the nations forbid this principle’s [sic] being in full force, but the time will come when the law of God will be in full force. This is loving your neighbour [sic] as ourselves; if he needs help, help him; and if he wants salvation and it is necessary to spill his blood on the earth in order that he may be saved, spill it. Any of you who understand the principles of eternity, if you have sinned a sin requiring the shedding of blood, except the sin unto death, would not be satisfied nor rest until your blood should be spilled, that you might gain that salvation you desire. This is the way to love mankind.”