A dear friend and brother in Christ, who used to host a Christian talk show on radio many years ago handed this me during the growing conflict I was experiencing in the seeker sensitive church we were in at the time. While it is likely this counsel could be improved upon (as is the case with all works of man), I think it good and godly counsel.

Having Harmony in Your Church Through Humility in Handling Doctrine

Discord in most churches is caused primarily by the straining out of gnats and swallowing of camels, If a church does not have agreement on the essentials, it is not a church of Jesus Christ, On the other hand, members of the church who think that every little pet opinion or “favorite” emphasis is worthy of debate (and the risk of unity), dishonor Christ also, Too few Christians can distinguish and discern which doctrines have what degree of gravity, Thus, we end up with either large congregations that ignore doctrine for the sake of gladhanded surface hospitality or small fortresses of “defenders of the only way” where you feel like you’re on trial whenever you speak!

Here are four broad areas of doctrine. If you will attempt to distinguish which area a given issue belongs to, you will have an easier time dealing with that issue. Thus, less chance of getting personally uptight and less chance of offending another. This material will help when used correctly, Two cautions before we start:

1.Truth offends. The assumption in this material is that we are dealing to some degree with lovers of truth. Unfortunately, our churches are not full of such people, You will encounter that problem.

2.Some doctrines overlap. This material and chart are convenient general categories, not rigid compartmentalizations, There is especially some blurry areas between II and 111 and between 111 and IV, Not only that, but when you are in a lively discussion of some issue, other issues come up which could put you in several categories at once.

You might be talking about some doctrine where you are aware that you are building a case from a very thorough connection of Scripture. The person you are trying to convince may refuse to yield to a passage of God’s Word.

All of a sudden, you are into the IMPERATIVE of the authority of Scripture as well as an open discussion of your original issue. These situations will require more wisdom yet.

Nonetheless, despite these two cautions, working with this material can revolutionize your spiritual walk with regard to harmony, discernment, unity and pride,

The first column is the type of truth you are dealing with, A BIBLICAL IMPERATIVE, BIBLICAL IMPLICATION or BIBICAL INTERPRETATION, Notice the first three deal with items directly from Scripture, but Item IV concerns things created in you by the Holy Spirit through your own context, your own understanding of principles and your own application to various areas of life,

The second column explains how to recognize these areas, This column gives the definition of the first column, BIBLICAL IMPERATIVES are the foundational truths such as the Deity of Christ, the Authority of Scripture, the Trinity and the Substitutionary Atonement. People who deny these truths are not Christians.

A BIBLICAL IMPLICATION also has no room for denial because it is an area where the Bible cannot teach but one thing. However, misunderstanding is possible because the truth is not stated in so many words. Rather it is woven through the fabric of Scripture. Even if you have a few passages where you are thoroughly convinced that your conclusion is obvious, you are humble enough to admit not only that a different view could be held by true Christians, but lo and behold, great people of God through the centuries have not been as certain as you are.

Thus, you become willing to patiently learn how to present your case and give folks lots of room to discover the conviction you have. For example, should Christians send their kids to government schools? For example, how fallen is man’s will? For example, Covenant vs Believers Baptism,

I believe firmly and staunchly in what I’ve concluded the Bible teaches on each of these. But, 1 view you as a Christian, and will not doubt the genuineness of your salvation for having not yet come to the same conclusions.

A BIBLICAL INTERPRETATION hinges on one passage or the interpretation techniques used for several passages, For example, Daniel 9,..where does the countdown of the 490 years start? Your answer from Isaiah and Ezra will influence your entire view of eschatology. So why should we argue about the interpretation of Revelation 5 if we already know our impasse is in the middle of Isaiah? Or perhaps the interpretation of the words °a cause” in the sin of being angry at a brother without cause! It comes down to an understanding of a particular, If we view it differently—and we both honestly can view it differently—that’s it! Fortunately, God has seen to it that no essential matter of faith or life is in this category,

Finally the DAILY WALK INDIVIDUALIZATION, Friends, if we haven’t got chapter and verse—even if we believe we have the mind of Christ on the matter—we must humbly avoid playing God over another conscience, Does Walt Disney promote the occult in Fantasia? Are certain beats of music admissable? Should you pray before, or after, your morning shower? Come on, folks! Romans 14 insists that we acknowledge liberty and conscience in these areas,

Columns 3 and 4 prescribe the limits of what we do with these doctrines. This will be as helpful as the recognition,

A BIBLICAL IMPERATIVE is not compromised or glossed over with anyone. Earnestly contend!! Don’t get off on blood transfusions, time travel and other things with cults and secularists, The only questions between you and them are: Who is God? Who is man? Who is Christ? What is truth? Stay on the subject with them,

BIBLICAL IMPLICATIONS are to be worked out carefully among believers, You have an obligation to the brethren on both sides. Be able to articulate what you believe and love them in what you consider their “future maturity”,

BIBLICAL INTERPRETATION makes for “iron sharpens iron” discussions with friends, but the church today should not be divided on predictive prophecy,

On DAILY WALK INDIVIDUALIZATION you may set an example, if you wish, but you are confusing your own authority with the Bibles if you command something that it doesn’t. 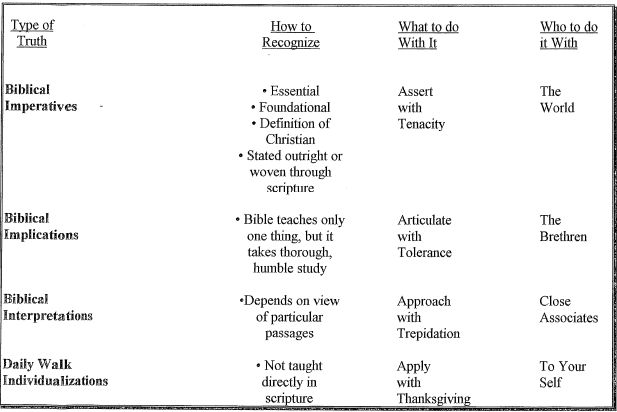 13 thoughts on “Unity in Truth”