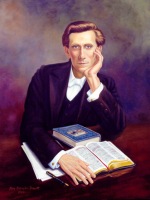 “The thing we kick against the most is the question of pain and suffering. We have naturally the idea that if we are happy and peaceful we are all right…Happiness is not a sign that we are right with God; happiness is a sign of satisfaction, that is all, and the majority of us can be satisfied on too low a level. Jesus Christ disturbs every kind of satisfaction that is less than delight in God. Every strand of sentimental satisfaction is an indication of how much farther we have to go before we understand the life of God, it is the satisfaction of a smug self-interest which God by circumstances and pain shocks us out of as we go in the discipline of life.”

Early on Saturday morning, a crowd began to gather just outside of Pastor Togba’s property. Some music was being played and I recognized a couple of what sounded like gospel tunes. It was not long before a crowd gathered to listen to something being said over a loudspeaker. I had been watching people stop to listen and I counted well over 200 before I stopped. With my curiosity getting the better of me, I decided to walk a little closer and see what was going on.

A man and his female were working up the crowd in the name of the Lord Jesus Christ. After a number of songs and with absolutely no Bible in sight, the man began to speak to the crowds. Just like the huckster I had heard in the marketplace shortly after I arrived, this fellow seemed to have been trained in the same school of “How to Con People using God’s Name in Vain!”

Passing a bucket around, he cajoled the listeners by telling them that they were in great need of having a blessing from God. He continued by stating that they would always remain poor unless they honored God’s preacher first, he continued with his harangue by starting with an offer of $100 blessings. When that didn’t work, he worked his way down to $50, $20, $10, and finally $5 before resorting to pleading for Liberian dollars. However, he did warn the people that Liberian dollar blessings were not as powerful as blessings which come from giving US dollar bills.

END_OF_DOCUMENT_TOKEN_TO_BE_REPLACED 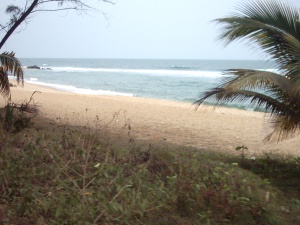 Some of the women seemed to be upset, and I could not begin to imagine what the church leaders were thinking about what they had overheard. Twenty pairs of eyes followed me as I walked through their midst and off the veranda into the dusty African evening.

Walking along the edge of Pastor Togba’s property, I noticed that it was not five minutes before Mr. Maryland walked out the door with all his bags. They were loaded into the vehicle in almost complete silence and without a word of thanks to Pastor Togba, he and his friend pulled out of the driveway and headed in towards town.

The members of the little congregation remained on the veranda and at the front of the house as I considered what I should do next. More appropriately, I considered how I needed to handle what I believed was right to do in this particular situation. Walking back up to the porch, I hesitantly asked them to gather together.

Me: “First, I want to apologize for what you heard. It was not my intention for anybody to overhear my private conversation with Mr. Maryland. While I do not believe that I should apologize for what I said, I do apologize for giving offense in regards to how I spoke to your guest. Please forgive me for I realize that my approach was not the best and my desire should remain to be more like Christ even when something displeases me! I also want each of you to know that the Lord has changed my own heart for the country of Liberia, and that regardless of how a missionary or pastor from America feels that it does not make his actions right. He is a complete embarrassment and does not reflect the words and actions of all missionaries or pastors from America or England.”

END_OF_DOCUMENT_TOKEN_TO_BE_REPLACED 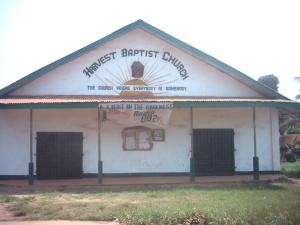 Later that afternoon, Pastor Togba was expecting another guest from America. The guest was coming from Maryland in the United States. The little church that was hosting this pastor was just about one mile down the road from Maranatha Baptist where Pastor Togba was the pastor. Like many small congregations, they did not have a facility for their guest to stay, so had enquired as to whether Pastor Togba and his family would allow this man to be a guest in his home to which he graciously agreed. While the little church was charismatic in nature, Pastor Togba and his dear wife were very gracious and counted it a privilege to open their home to strangers.

A special project that had begun the night before was being concluded when we arrived. A unique custom found in parts of Africa is for the congregation to give an offering to purchase whitewash. As a sign of honor to their coming guest, many within the congregation would gather at the home where the guest would stay and completely whitewash the concrete or mud-brick home.

This small congregation had purchased what they could probably not really afford. They had then walked and worked in the oppressive heat just to make Pastor Togba’s home look a little nicer and cleaner with the new whitewash.

The day had finally arrived for their guest to arrive. Food and cool bottles of water waited on the table, and after two days of working to whitewash the house, the congregation stood patiently under the porch for their guest. The time for his arrival came and quickly went and still they waited. It was beginning to grow dark as the preacher finally made his appearance about three hours late! And it was definitely a dramatic appearance!

END_OF_DOCUMENT_TOKEN_TO_BE_REPLACED

“… We ask that everything we do would bring honor to you … and we just lift up especially Mayor Annise Parker. … Lord, we thank you just for raising her up and just for your goodness, your mercy in her life, and just for supernatural wisdom, Father. We honor her today and our other officials, and Lord, we count it a joy and honor to be here in your presence with all of our friends and we just thank you for this day. In Jesus name, amen.”

This is as mind boggling as the wolf who “blessed” an abortion mill, calling it “sacred ground.”

Ingrid Schlueter hits the nail on the head regarding Joel Osteen with this excerpt from her commentary:

We bring honor to God by asking Him to bless a woman who is living in conduct that He calls an “abomination”? Does Joel Osteen even possess a Bible?

As a follow-up to Unworthy 1’s post on the International House of Prayer (found here) I’ve decided to post the following eye-opening video I just discovered. The video is a news piece from CBN and is done in a favorable light (imagine that coming from false prophet Pat Robertson’s broadcasting network).

Not only does IHOP’s Mike Binkle have ties to Bob Jones, but in the beginning of the video the commentator claims that Binkle says that Christ’s return is dependent upon man.

If I had a nickle for every time one of these Charismatic Charlatans claimed that God was powerless or helpless to do what He wants, and He must rely on us for His will to be accomplished, I’d be a rich man. 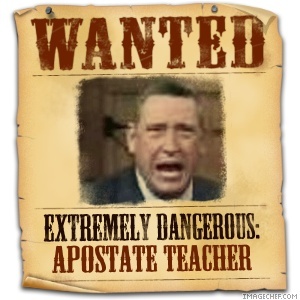 A bad economy is never a good thing…….or is it? God used swarms of locusts to destroy the crops in Judah, in order that the people would stop depending on the sacrifices in the temple to cover their sins, and return to obedience to YHVH. Joel 1:13-14—“Gird yourselves and lament, you priests; wail, you who minister before the altar; come, lie all night in sackcloth, you who minister to my God; for the grain offering and the drink offering are withheld from the house of your God. Consecrate a fast, call a sacred assembly; gather the elders and all the inhabitants of the land into the house of the LORD your God, and cry out to the LORD.”

Well, now, all those who have “sown” into Rod Parsley’s “ministry” in order to get their “abundance” and their “breakthrough” may have to send their money elsewhere. Seems that things aren’t going so good in the Rod Parsley House of Heresy™ (from the Columbus [OH] Dispatch):

The headline of the appeal for donations reads: “Will you help me take back what the devil stole?”

When asked to comment yesterday, Parsley’s World Harvest Church issued a statement saying the recession caused a decline in member giving in 2009, which has led to a fourth-quarter deficit of $3 million despite a 30 percent reduction in the budget.

This year, the church settled for $3.1 million with a family whose son was spanked at its day-care center in 2006, to the point his buttocks and legs were covered with welts and abrasions.

The boy, then 2, said he was spanked with a “knife” by a substitute teacher. His parents, Michael and Lacey Faieta, believe it was a ruler.

Yeah, the devil stole that money, alright. He used Rod Parsley to steal that money from people who could least deserve to lose it.

Perhaps Rod can put his money where his mouth is (pun intended), practice what he preaches, and “sow a seed” into a ministry that takes the gospel to the poor and the sick. And by “gospel” I mean the REAL gospel–the one that says we are dead sinners who need the blood of Christ to pay the debt we owe to God. Not the heretical “prosperity” gibberish that spews from Parsley’s mouth.

For those who have never suffered under the bondage of the Word of Faith extension of the Charasmatic movement (that I and many others have been delivered from) you need to know that it’s not all about naming it and claiming it, begging for money, speaking in tongues, being slain in the spirit, (fake) healings, (false) prophecies, and dancing in the aisles; sometimes they actually teach from the Bible . . . and that’s when it really gets scary.

In a nutshell this is four minutes of absolute foolishness and is a perfect example of awful hermeneutics and complete biblical illiteracy. But hey, he sure does tickle ears, doesn’t he?

Thanks to DefCon reader Shane for alerting me to this video clip.

Some continue to question why we share videos, comments, blogs, etc. about those who are teaching heresy.  I believe that if more Christians were discerning, submissive to the Holy Spirit, and Berean Christians in their study of God’s Word that charlatans like those mentioned in this particular video would not have the time of day.

Sadly, it is easier to let somebody else do the “studying” (if that’s what you want to call it) for most who claim the name of Christ.  Instead of testing the spirits to see whether they are of God, thousands upon thousands are swallowing the bait put out by the enemy of our souls.

Then despite the truth of Scripture to lay up treasures in heaven and not on earth, and Colossians which tells us NOT to set our affections on things of this earth – you have videos like this showing one preacher “blessing another” by praying the blessing of a private airplane (for ministry purposes of course).

And if you can’t have your own airplane, then the least you can do is to get a prayer cloth prayed and sweated over personally for your point of contact between you and whatever your little heart desires!