This is well worth watching. The Muslim Jesus is NOT the true Jesus of the Bible. Dr. John MacArthur shares some thoughts that reveal the truth of the Quran as believed by Muslims.

Video about the work of God in Islamic nations and a searcher for truth who places his faith in Jesus. Please pray for this very dangerous work and that Islam might fall not by the bloody sword of the Crusaders, or the bombs of the American military machine, but rather by the Living Word of God. And that men might be raised up to translate sound doctrinal materials into Arabic and send to our brothers and sisters and those on the front line.

Disclaimer – Some of the information in these blogs is not deemed suitable for young readers.  We ask that discretion be used.  Much prayer is needed in the understanding of the ways of Lucifer.  This is NOT a trivial matter and we take our responsibility to warn of the evil and dangers of heresy, false doctrine, and cults very seriously.

The following information makes it very clear that no true Bible-believing Christian who has been born again by the Spirit of God can willfully, deliberately partake in the oath that follows.  It is a wicked organization, and it does not matter that they do some good or have children’s hospitals.

No local church will ever be blessed by God that allows a Shriner or a Mason in without that person first being willing to recant of the evil and the curses which they have uttered that are contrary to the Word of God! We will be discussing this in more detail in a later blog, Lord willing. 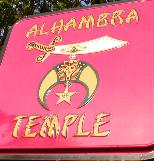 “Candidates for induction into the Shriners are greeted by a High Priest, who says:

“By the existence of Allah and the creed of Mohammed; by the legendary sanctity of our Tabernacle at Mecca, we greet you.”

The inductees then swear on the Bible and the Koran, in the name of Mohammed, and invoke Masonry’s usual gruesome penalties upon themselves:

“I do hereby, upon this Bible, and on the mysterious legend of the Koran, and its dedication to the Mohammedan faith, promise and swear and vow … that I will never reveal any secret part or portion whatsoever of the ceremonies … and now upon this sacred book, by the sincerity of a Moslem’s oath I here register this irrevocable vow … in willful violation whereof may I incur the fearful penalty of having my eyeballs pierced to the center with a three-edged blade, my feet flayed and I be forced to walk the hot sands upon the sterile shores of the Red Sea until the flaming sun shall strike me with livid plague, and may Allah, the god of Arab, Moslem and Mohammedan, the god of our fathers, support me to the entire fulfillment of the same. Amen. Amen. Amen.”

With this oath, Christians swear on the Koran, and declare Allah to be “the god of our fathers.” From the perspective of Christianity and Islam alike, Shriners take the name of God in vain, and mock both faiths.”