And I wonder how many “Christian” bookstores still carry this man’s books.

Required education for those less discerning, in my opinion. 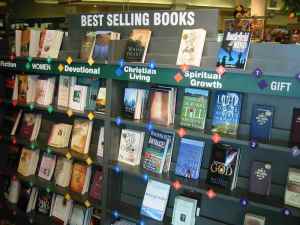 Back in February I asked the question do you support your local Christian bookstore?

I now have a follow-up question:

Are the owners of Christian bookstores responsible to their fellow-Christians, the Church, and ultimately God, for the products they sell?

This past week I entered another one of these Christian book and paraphernalia bazaars. The first faces I saw staring back at me as soon as I entered were the prominently displayed faces of Joel Osteen, Juanita Bynum, TD Jakes, and Joyce Meyer (just to name a few) along with all the “Jesus junk” and trinkets that adorned the shelves and displays from wall to wall. A few more steps and I was struck with Rob Bell’s book Sex God and his Nooma videos

Another disturbing book I unexpectedly came across was a children’s book on the virgin Mary and praying the Rosary. In this book were Romanism’s false teaching of Mary being crowned Queen of Heaven and Queen of the universe. This was in a “Christian” bookstore!

I recall a brief conversation I had with the owner of one of these bookstore a few months back in which he provided me two excuses reasons why he sold the merchandise of such heretical teachers as Rick Warren, Joel Osteen, Brian McLaren and Rob Bell. He said he 1). cannot possibly read every book that he sells; and that he 2). does not want to promote censorship.

This was such a sad example of wiggling around his deeper responsibility to not lead people astray. First of all he can’t be accused of censorship for not carrying certain books anymore than he an be accused of censorship for not allowing these types of books into his home. He owns his home, he owns the bookstore. He–as a retailer–has the right to sell whatever he does or does not want on his shelves, which explains the absence of such material as the Book of Mormon, the Satanic Bible or pornography. Is the absence of these books considered “censorship?” Furthermore, in order for his refusal to carry certain books to qualify as “censorship” he would have to be a representative of the government.

Secondly, the “I can’t possibly read every book I sell” excuse is a cop-out. You don’t have to read every book by Brian McLaren, Rob Bell or Robert Schuller to know that they’re spreading heresy . . . it’s common knowledge! And if you’re not that aware of what’s going on or you lack discernment regarding the wolves among us, a quick internet search will tell you all you need to know.

Do you need to read every issue of the Awake! that the Watchtower organization produces to be able to confidently say that they are a cult and thus not carry their material? Of course not. So why do certain big name heretics and false teachers under the umbrella of evangelicalism get a pass by the guise of willful ignorance?

These bookstore owners are knowingly or unknowingly selling doctrines of demons; material that an impressionable undiscerning person could buy which would lead them on the primrose path to Hell. This leads me to ask, will these bookstore owners be held responsible before God for selling these heretical, apostate, and often times blasphemous doctrines of wolves in sheep’s clothing?